The Greek letters are usually used in tattoos. Alpha and Omega are the beginning and the end in tattoo symbolism and meanings. These two letters are very rarely going separately.

The Greek people believed that the goddess Moira decide when a person to be born and to die, or in a biblical sense when a person should begin or end.

The deep symbolism lies in the fact that the Alpha and Omega are, as we already said in a literal sense, are the first and the last letters of the alphabet. But, when Jesus uses them in relating to himself, they take on a totally different meaning. 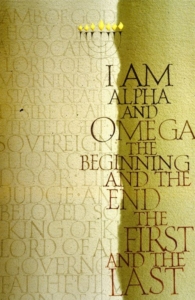 In Revelation, which is actually the final book of the Bible, prophetic visions of the end of the world, as well as the second coming abound, and it is in this passages where the phrase “Alpha and Omega” has been found. More than just being an intimation of the eternal nature of Christ, the letters have also come to mean his completeness, as well as promise to return.

According to some Greek philosophers, Alpha is the one that represents the spiritual essence of being, while Omega is the one that symbolizes physicality. The answer to one of the main philosophical problems lies in the combination of the two symbols.

In most of the cases, these two letters are displayed simultaneously. Tattoos of these two symbols are placed either on both hands or on the shin. Sometimes, the letters are combined in just a single drawing. These tattoos are more appropriate for men than women, as the representatives of the male sex are more likely to reflect on the truth of the eternal. Because of this, philosophers claim that this tattoo is not very popular among ladies.