The game of pool belongs to the category of ‘cue sports,’ and it is recognized as one of the most popular games to play, mainly in the ‘bar scene.’ Even though there are many different games in this cue sports category, throughout America, the game of ‘eight ball’ is the one that is on the top of the ranks.

This particular game can be played by four people, two on each team. We can also play this game with just two people, one for each side. Fifteen balls are put on the billiards table, and each ball has a number on the side. These balls also have two different patterns on them, the stripes and the solids.

Both stripes and solids are placed inside the frame of the triangle. As they are set, they display a pattern. This is because you need to even the playing field when you take the cue ball and break up the triangle of balls. Typically, there are five balls at the base in the pattern of stripe, solid, stripe, solid, stripe. On top of the five balls, there are four more, above those, three, etc. In the center of this triangle of billiard balls is the famous eight ball.

The eight ball is the central part of this game since it can either make or break you. This is the last ball that should be put in one of the pockets. If this ball is hit inside the pockets at any other time during the match, the player who knocked the eight ball loses the game. The rule of this game depends on who is playing and where. However, if you are playing competitively in a league, the rules can be very strict.

The symbol of the eight ball itself has become a logo for the billiard community. As previously said, this ball is what would be called the most crucial ball out of the rack. This is because it decides whether you win or lose. From there, the image of the eight ball can serve as both a symbol of good or bad luck. This is why the eight ball is a mysterious, black figure that keeps people wondering about ‘what will happen.’ 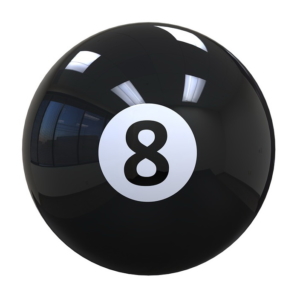 . It looks incredible when combined with many other graphics, such as a fan of cards, dice, and money signs. This tattoo can show to other people that you are a great pool player who loves to take risks. Moreover, it can reveal that you live your life on the edge.

The Eight Ball of Fire Tattoo

This is a very powerful image, which in the world of sports, especially in basketball and baseball, can signify that whoever, or whatever team has the ball, is ‘on fire’ or ‘on a roll.’ In other words, this means that they are winning. When it comes to the billiard community, this is mostly true with the eight ball. This is because in the game itself, once one of the players knocks one of their billiard balls in, they keep on pushing the balls in without giving up a turn to the other player.

There are even some cases when one person knocks all their balls in without giving the opponent a chance. In this particular case, the individual is said to be on a streak, the ball is so hot and cannot be touched. This design engulfed in a flame is a very popular tattoo. How this flame is displayed, bursting, or in a kind of flame streak depends on the owner of the tattoo. Either way, the symbolism of the flames it the design doesn’t change.

Every time you think about a kind, you visualize lots of jewelry, gold, and diamonds. The one piece of jewelry that only the king himself wears would be the crown which sits upon his head. The crown serves as a symbol of royalty. For a very long time, the images of kings sitting upon their throne with crowns on their heads made of pure gold and diamonds have been recognized as an iconic symbol of power. When the eight ball is depicted with a crown on top in the tattoo design, it can be used to show to others that you are the king of the game. This tattoo symbolizes pure domination. This design shows that you are the best at the game, and that is all there is to it.

You can always choose to add a banner draped across the tattoo as a finishing touch. The best word that you can add next to an eight ball is the word ‘lucky.’ Another way of symbolizing good luck is to add angel wings sprouting from the sides of the eight ball. Soaring high is essentially just another way of saying that you are on a roll or a streak. Even though this is the same meaning as an eight ball on fire, angel wings in place of the flames give a more ‘pure’ feeling, but then again, it depends on the owner.

If you love playing the game of pool and a little bit of gambling, then this tattoo is the one for you. As previously mentioned, these designs look amazing on the skin and have some great meanings attached to them, but you can always find your own eight ball tattoo.