Animals are multi-cellular eukaryotic organisms that form the biological kingdom of Animalia. With several exceptions, animals consume organic material, breathe oxygen, have the ability to move, and can reproduce sexually. They can also grow from a hollow sphere of cells, the blastula, during embryonic development. 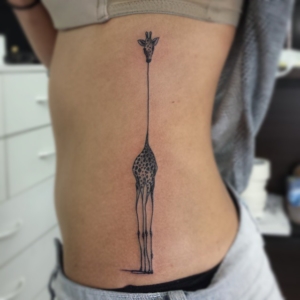 Animals are the most common subject in tattooing. A lot of people get their inspiration from different types of animals. They even appreciate their spiritual meanings or symbolism, depending on the type of animal.

Here, we are going to talk about one such animal, which is the tallest one in the world. Yes, we will talk about the giraffe, which has various meanings in different cultures worldwide.

The giraffe is one of the beautiful quirks of Mother Nature. It is a graceful, but still clumsy animal at the same time. How giraffes manage to coordinate their awkward legs and long neck in order to move with such elegance and grace fascinates human beings.

The giraffe can adapt to its environment and may make use of relatively scarce resources. They sleep for just several hours a day and can feast on the almost inedible acacia tree. A lot of local tribes view this animal as an intuitive one as of its perfect vision and long neck. They can see danger long before others around them can even think about what will come.

They are most vulnerable when they bend to take a drink of water, as they want to be quite aware and alert of their environment. The giraffe is the poignant reminder of how important paying attention to our surroundings is.

Nowadays, giraffe enjoys the status of noble animals in a lot of modern works of art. One such art is tattoo art, as we already mentioned.

The giraffe is the tallest animal in the entire world, about eighteen feet. It is the symbol of greatness and peace to the Chinese and Arabs. These people exported the animal to China from its native Africa via India. A gift from a giraffe became the sign of friendliness and peace between the rulers.

Up until the eighteenth century, only Europeans knew the giraffe, from the accounts of travelers of Rome and Greece. Like some other animals of Africa, which find their uses in tattoo art, they also do that. Giraffes became the symbols of all wildlife there and an attempt to preserve the environment.

The giraffe is a remarkable animal, and its symbolic meaning is equally remarkable. Giraffe tattoos will have almost the same meanings and symbolism as the animal itself.

Some of the most specific meanings that giraffe tattoos have are the following:

Giraffes are very adaptable animals. This means that getting a giraffe tattoo can show you are similar in that matter. Moreover, it is a cautious animal as it is vulnerable and has excellent intuition. Perhaps the giraffe tattoo is good for you as it represents you as a similar character.

Although a giraffe tattoo is not an extremely popular design, there are people that simply love it. For that purpose, you should choose a very skilled tattoo artist. The skin and texture of this animal are complicated, so the artist should work more on this tattoo and give his best.