As we all know, animals are among the most common motifs for beautiful tattoo designs. One such animal is the gorilla. Usually misunderstood as aggressive and ferocious, the gorilla is quite a peaceful creature.

Maybe its close relationship with humans, in mannerism and appearance, is what causes it to be a motif for tattoos. After all, the minds of human beings tend to fear that which exposes their true identity.

Gorillas are ground walking, and plant-eating apes that live in the forests of central Sub-Saharan Africa. The genus Gorilla consists of two species, which are the eastern gorillas and the western gorillas. Also, it consists of either four or five subspecies. They are the largest living primates in the world. The DNA of gorillas is very similar to that of human beings, from 95 to 99%. They are the following closest living relatives to human beings after the chimpanzees and bonobos. 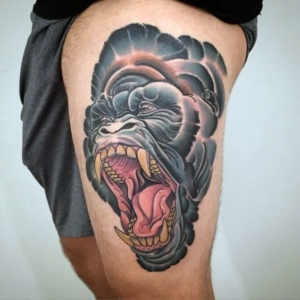 The natural habitats of these animals cover tropical or subtropical forests in Sub-Saharan Africa. Even though their range covers a small percentage of Sub-Saharan Africa, the gorillas cover a wide range of elevations. The mountain gorilla, for example, inhabits the Albertine Rift cloud forests of the Virunga Volcanoes. These areas range in altitude from 2,200 to 4,300 meters. Lowland gorillas live in dense forests, as well as lowland swamps and marshes as low as sea level. The western lowland gorillas live in Central West African countries, while the eastern ones live in the Democratic Republic of the Congo.

Gorillas are intimately conscious of each member within their communities. They share the responsibility to assist both the elderly and young members of their groups. The term which we use for a group of gorillas is a troop. Such shared responsibility is a message for humans not to pass over their debts to their elders. It tells them to be active participants in the final days of their closest ones. Likewise, they show us that we should also raise our children.

The animal symbolism of this animal is nobler than face-value or surface appearance. Gorillas are vastly sociable animals and have intricate methods of communication with one another. Moreover, there is a great deal of honor during interactions with each other. Some of the most common symbolic meanings of gorillas are communication, leadership, loyalty, compassion, nobility, intelligence, strength, nurturing, and responsibility.

The gorilla is the largest of the manlike apes, a forest dweller of equatorial Africa. Even though for many years, people saw this animal as a ferocious and deadly one, new research shows that it is not an aggressive one, but it is even shy. Gorillas are big, smart, and fierce.

Gorilla tattoos range from tiny silhouettes of the creature to full-blown back pieces in a jungle setting. Most of these tattoos symbolize strength. However, because of the threatened status of the animal, it became the living symbol for wildlife conservation and protection.

As the gorilla can be a scary animal, people usually associate the tattoo with characteristics such as power, aggression, and ferocity. However, this is one of the most compassionate animals in the animal kingdom.

This animal is a very social one. You can tell this by only watching their communications with other gorillas and also humans when in captivity. Looking in their eyes, you will also see a deeper meaning and know there is wisdom hiding behind their eyes.

The gorilla tattoo can be a symbolic value for those who wear such types of tattoo designs. They can represent a lot of different things. Most meanings behind this tattoo design in nature are positive.

Gorillas are the natural symbol of leadership and strength. Yet, at the same time, they find their associations with intelligence, dignity, compassion, and honor.

The gorilla tattoos usually mean or symbolize the following:

Despite these meanings and symbolism, there are a lot more, which we already mentioned above.

The gorilla tattoo designs can be designed in a variety of different ways. They can look realistic, or they can look like a caricature. They can portray the gorilla looking calm, while there are others in which the gorilla appears wild. The most common tattoo variation is the head of the animal. However, there are tattoos that portray the entire animal.

These tattoo designs may also appear in combination with associated elements and symbols. For instance, the gorilla usually appears in combinations with plants, flowers, bamboo trees, or other animals too. There are tattoos that portray the animal with a young gorilla or another adult gorilla. There can also be landscape in the background of your tattoo design of this animal.

As we can see, these tattoos combine a lot of motifs, and they have a free choice. After all, it is your own choice – you can choose your design, and what it will symbolize or mean, without any problem. It is you who will wear it forever, not others.