Animals are the most common inspiration for beautiful and stunning tattoo designs. Tattoo lovers choose some of them because of their appearance, while others because of their symbolism and meaning. Also, people choose animals because of their existence in their lives. Usually, wild animals are more present in tattoos than domestic ones. One such animal which finds its uses in tattoo art is the fun and loving monkey. Below, we are going to talk about the characteristics of this animal, and the meaning and symbolism of monkey tattoos. 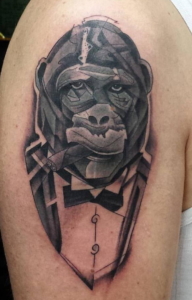 Monkey is the common name that may refer to groups or species of mammals. These mammals are, in part, the simians of infraorder Simiiformes. This term applies descriptively to groups of primates, such as the families of the new world and old world monkeys.

A lot of monkey species are tree-dwelling or arboreal, even though there are species that live primarily on the ground. Such monkeys are the baboons. Most species are active during the day or diurnal. Monkeys are generally considered as intelligent, particularly the old world monkeys of Catarrhini.

There are various things that come to our minds when we think about monkeys. They are usually cute and highly intelligent animals. Just like we already said, there are various species that have their characteristics. This is in terms of color, size, location, as well as abilities. They are excellent caregivers to the young and even have humanistic movement.

Monkeys are quite vocal animals, and that is their main way of communicating with one another. They actually give off various pitches to warm off danger, to call a mater, or communicate with their young. Although people studied the communication of monkeys for a long time, there are many things we don’t know about them.

Monkeys can be very small animals or very large, and it depends on the species. They may also get into mischief quickly, both in their natural environment and in captivity. They also have forward-facing eyes, as well as flat noses. They even have opposable thumbs that help them climb and move. They have fingers with a similar structure as one of the human beings. They use tools like rocks and sticks, and they can use leaves to scoop water up in and drink.

Monkeys are very similar to humans in various ways. For instance, they seem to explore a number of the same emotions within their groups.

The agility and capacity of monkeys for imitation made it a favorite animal in cultures that overlap with its habitat. Averse to change, but also to adapt well over time, the mischievous monkeys are present in religion, folklore, astrology, and myth. Moreover, they are present in tattoos.

In astrology, in the Chinese Zodiac, the people who are born in the Year of the Monkey are clever, and successful, but also impatient. In more recent times, monkeys also became the symbol of something primeval, cousins in the family tree of human evolution.

Tattoos of monkeys frequently show them in some active pose since agility is part of their character. Their appearance is generally an active and happy one, easily recognizable even in silhouette.

Monkey tattoos may come in different sizes and colors. Throughout the history of humans, these adorable creatures are the embodiment of:

Tattoos of monkeys are with very contradictory value. In every culture, the monkey has a different symbolic meaning. For example, for Christians, the monkey identifies with heresy, idolatry, and vice. For Egyptians, it is the symbol of wisdom. In India, there is a god called Hanuman, the monkey, and it symbolizes self-sacrifice, perseverance, and courage. In China, the monkey is the symbol of maternal care.

Tattoos of monkeys are different. They can be images that represent different existing species of monkeys. They can also be cartoon versions of this animal. The meaning of the monkey tattoo is very much going to depend on the patterning technique.

In the West, the monkey consistently associates with stupidity and the predominance of instincts over reason. Also, it associates with the tendency to imitate and even with greed and harm sometimes. In the East, the attitude that people had towards monkeys was positive.

The contradictory image of the monkey is not that popular as some other symbols, but there are people who love this animal. The symbolism of the monkey will depend on the tradition in which you ink the tattoo.

Being our closest relative species in the animal kingdom, the monkey has a profound connection to humanity. They are popular religious symbols, and nowadays, that is one of the reasons why people love them. Because of that, they also incorporate them into tattoos, which have specific meanings.