If sea or ocean creatures fascinate you, you can get yourself a tattoo of one such. The world of tattoos gifted the water lovers with new emerging tattoo designs of sea creatures that they really like. With wavy beaches, as well as artistic imaginations, the tattoos give an amazing look to the tattoo wearers. There are a lot of tattoo designs which the ocean and see, together with the marine life, inspire. The ocean actually covers almost 70% of the surface of our planet. It is a great source of energy, food, alternative transportation. It is also full of all types of unique and beautiful exotic marine life.

The ocean does not only provide these things for us, but it also showcases thousands of artifacts from our past. This happens due to the ships which sank and precious cargo that fell over.

Many people find their interest in anchor and ship tattoos, but there are those who prefer tattoos of marine life. These tattoos are beautiful and with great symbolism. Marine creatures are a great inspiration for wonderful designs. 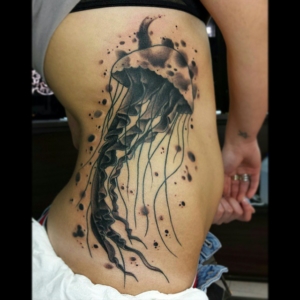 As the entire ocean is full of wonder and amazement, it provides people with a sense of peace, security, and motivation. Here, we are going to talk about the tattoo of a jellyfish and its symbolism in tattoo art.

Jellyfish are mainly free-swimming marine animals with bells in the shape of an umbrella, and trailing tentacles, though several aren’t mobile. The bell can pulsate to provide propulsion and even highly efficient locomotion.

Jellyfish have a complex life cycle. The medusa is normally the sexual phase, the planula larva can disperse widely, and a sedentary polyp phase follows it.

Jellyfish are present everywhere around the world, from water surfaces to the deep sea. They are large and colorful, and they are common in coastal zones around the world. Several cultures in the world eat jellyfish, and some Asian countries consider them a delicacy.

The jellyfish is not frequently the subject of lore or legends, even though it does happen occasionally. However, in tattoo art, the jellyfish isn’t an uncommon image, especially in tattoos with an ocean or sea theme.

These designs emphasize the beautiful and gossamer grace of the jellyfish, as it seems to float in the breeze of unseen current. It seems naturally mysterious to people, and are potentially dangerous sometimes. However, they remain visually delightful.

These ancient travelers of the sea do not use a heart, gills, or lungs, and their simplistic way of life is simple and complex simultaneously. For those who understand this creature’s amazing attributes, using it in a tattoo will be amazing.

The jellyfish symbolizes adaptation to your surroundings. Moreover, these tattoo designs can symbolize peacefulness, calming presence, and tranquility. According to the mythology of Japan, the jellyfish was the servant of the gods. This jellyfish relies on the currents around it for transitioning through the water.

The jellyfish also symbolizes ancient wisdom, as it floats around for millions of years simply using the ebb and flow of the earth. The relaxed and calm feature connects with those people who have an affinity to nature. They have primal knowledge, just like the jellyfish.

They are using their instincts to make their ways through their lives and their own paces. Those that appreciate this world’s magnificence and all its creatures also have a profound association with this creature.

Jellyfish tattoos are common among people who live near the sea and the ocean. The image of this creature is not a purely female or purely male. Despite tranquility, which we already mentioned, these tattoos embody elegance. Jellyfish move in harmony with the flow of life and show how it feels to interact with the universe’s natural energy.

As we said, jellyfish are common among those people who love the sea and life in general. The unique appearance of the jellyfish permits you to show your creativity in the choice of design. You can select some jellyfish that has delicate tentacles, such as small round little body and eyes. You can also choose a jellyfish with a large and bright, realistic body.

You can paint such realistic tattoos in many different colors and shades, from pinkish to orange hues. You can circle the jellyfish bluish tint. Extraordinarily individualists and people usually make tattoos of jellyfish their complex and fantastic start.

Jellyfish are strange creatures, and their use in tattoo art adds to the magic that revolves around them. That’s why you should choose this tattoo, especially if you love marine life or sea and ocean in general.