The anchor symbol in the tattoo world has been around since the time of the Sumerians in 2000 – 2500 BC and still holds strong today. It is one of the oldest symbols that have been used in tattoos, with the first representations being used during the beginning of Christianity at a time when Christians were persecuted for their beliefs. It is one of a handful of symbols in the world of tattoos that has remained both favorite and accurate to its origins.

The bearer of the anchor is likely a seafarer of some type – traditionally military, such as Navy, Marines, or Coast Guard, but sometimes recreational or commercial. In naval legends, the tattooed anchor showed that a sailor had sailed the Atlantic Ocean. In ancient times, among the Mediterranean seafarers, the anchor was a symbol of sea gods. 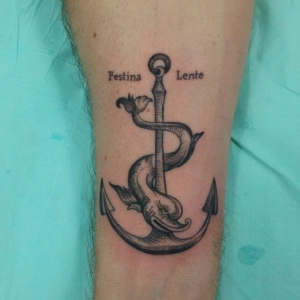 In early Christianity, the anchor – together with a horizontal tie bar under the ring – was used as a secret symbol by its resemblance to a cross. A lot of times, the anchor was a framework that the artist used to hang some different elements and symbols on it, elaborating something more specific, such as various creatures of the sea, ships, ship wheels, life preservers, names of ports, and stars. Throughout the length of the same lines, since anchors can come in a variety of different shapes and sizes, you can get it anywhere on the body.

According to some scholars, this symbol also symbolizes the connection of feminine and masculine powers, with the crescent, which is the bottom half of the anchor, being the female element and the rod representing the male phallus. This ideology was commonly found in ancient Egypt since the symbol is akin to the Ankh, the Egyptian symbol for Life.

In general, though, it guarantees stability and security in the physical world, by extension, as well as steadfastness, hope, and trust in the spiritual world.