The jester or court fool is an interesting figure in tattoo imagery. Its depiction is in the typical “jester’s motley” as an entertaining fool and just as usually as an evil character. Over the ages, the Jester’s motley evolved into the form with which it nowadays finds its association. In that form, the Jester wears brightly decorated, patch-work clothing hung with bells, including the dropping pointed hats.

Jesters were usually people of some wit and originality. The malevolent version, which is sometimes present in tattoos, uses the same accouterments. It even includes the small puppet version of the jesters that they sometimes carry. However, the faces of these evil characters have narrower eyes, or fangs, or also pointed ears. This is something a bit maniacal and frightening. 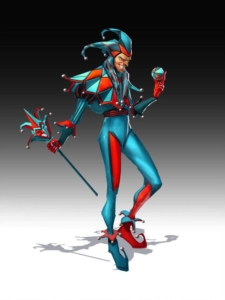 A jester, court jester, or also a fool, was historically an entertainer during the medieval and Renaissance eras. Jesters were members of the household of a nobleman or a monarch. These people employed jesters to entertain them and their guests.

Jesters were also itinerant performers that entertained common folk at fairs and markets.  They are present-day entertainers as well, and they resemble their historical counterparts.

In medieval times, jesters had brightly-colored clothes and eccentric hats in a motley pattern. Their modern counterparts often mimic this costume too. Jesters entertained other people with a wide variety of skills. Such skills were singing, and music, storytelling; however, many of them employed acrobatics, telling jokes, juggling, imitation, and magic tricks.

They performed much of the entertainment in comic styles, and many jesters made contemporary jokes in word or song. Such jokes were about people or events that the audiences knew very well.

Early jesters were quite popular in Ancient Egypt, and they entertained Egyptian pharaohs. The ancient Romans also had a tradition of professional jesters, and they called them balatrones. They paid balatrones for their jests, and the tables of the wealthy were open to them for their amusement. Jesters were also popular with the Aztec people during the 14th and the 16th centuries.

The word “fool” comes from the Latin “follis” which means “bag of wind” or bellows. It also means that which contains breath or air. Also, the modern term Jester derives from older forms, such as gesture, or Jester, originally from Anglo-Norman (French). These words mean storyteller or minstrel. Other earlier terms also include fol, disour, and border.

If you love laughing at life and want to present your playful side, jester tattoos will be excellent for you.

They are entertainers whose history goes deep into the Middle Ages. They were around for centuries, helping to improve the mood in the royal court. However, they were usually taking things too far, trying to get laughs.

Nowadays, many people get these tattoos as they represent the fun, and also the evil side of the clown. There are tattoos of the happy and the evil Jester.

Some of the most common meanings of the happy jester tattoos are:

Some of the most common meanings of the evil jester tattoos are:

The silly jesters are some of the most creative spirits in this world. They use the jester tattoos to show others and themselves that they have something special and unique to offer. However, those things may not be so apparent on the surface.

There are some other meanings that jester tattoos may have, and they are struggle, determination, focus, and commitment.

We can say that the images of these funny and entertaining people are quite famous in tattoo art. While not every tattoo is symbolic, the classic image of the Jester is easily recognizable to many people. Because of that, jester tattoos usually symbolize all those different things we mentioned above.

There are actually numerous ways to employ the image of a jester in a tattoo.

Regardless of what the reason behind the tattoo is or where you want to place it, consider these styles:

Jester tattoos can take on countless forms and meanings. You can design your tattoo on your own, with your own colors and personal touches. In that way, you will show the world your playful side too.