One of the most significant aspects of tattoo design is the basic element used in it. When a person wants something different for their new tattoo designs, then they can go for something as unusual as a clown tattoo.

In general, these are considered as hilarious characters that perform antics to entertain people, as well as make them laugh. However, these characters can sometimes be evil and sinister as well, as they are depicted in some stories or movies, where they portray some negative characters. 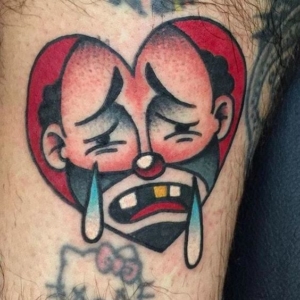 This art design can be worn by both women and men, and it can convey some different meanings, which are based on the expression of the clown bears in the tattoo design. The best thing about these tattoos is that they have a vibrant quality, as a result of the array of colors that can be utilized for tattooing them. In addition, they can also convey different meanings. The aesthetic, as well as the symbolic value, are both the necessary pre-requisites of this artist’s designs, and this makes this element an attractive tattoo design.

The clown, having a big red nose, white makeup, exaggerated smile, oversized shoes, baggy clothes, as well as crazy hair, is most often used as a symbol of laughter, playfulness, as well as fun in the tattoo art. Historically, his face can be a sad one, complete with tears, and usually connected with some tragic irony.

However, in ancient times, the clown also stood for the reversal of the norm. He played the fool to the majesty of the king, as he mocked authority, as well as parodied the establishment and ridiculed that which was accepted, all in the guise of entertainment and inducing laughter.

Horror movies gave an entirely new context to the subject. The men, as well as women that choose these jesters on the skin, are not mainstream in the world of tattoos. Clowns hold a specific symbolic value to people who bear them as art. Regardless of being happy, sad, menacing, evil or wicked, clown tattoos will always leave an impression.

The clowns are meant to be happy people that were engaged in the art of entertaining the young, as well as the old at gatherings and circuses. This happy feeling is induced by a smiling face art. In this tattoo design, you should look for soft expression and smiling eyes. The happy clown tattoo represents happiness, joy, laughter, playfulness, and prankster.

The sad-faced tattoo design is another popular option among clown art, which indicates a heartbroken, droopy looking expression that creates a completely unusual look. This type of clown tattoo symbolizes unhappiness, depression, mystery, and mistakes.

A sinister-looking clown is the one that you never want to come across, but believe it or not, the scary clown tattoo is one of the most popular and common tattoo designs these days. A white-faced clown with some black shading in the backdrop and maybe a bloodstained dagger in the image can create a very scary look.

This type of tattoo is a design that brings down the memories from the Joker character of the Batman series, and it is another popular design option for people that look for something different and uncommon. There is another variation in the Joker design, and it is the one that features the character that wears a jester hat with some balls hanging from it, together with a wide-toothed grin to complete the expression.

When it comes to the symbolism of this tattoo, the beginning can date back centuries. Known by another name – jester – the clowns commonly entertained royal courts. Clowns entertained their audience by making them laugh. Usually, they would do about anything to get a good laugh. Jesters are often symbolized by their hats, which have some points with bells on the ends. Even in those times, clowns were known to wear colorful, as well as vibrant attire. Even though clowns seemed happy to perform among royalty, they usually mocked the kind, the queen, and the court. Even nowadays, they represent mockery and jealousy.

The clown is a character that is well-known worldwide. Even at this age in time, clowns are still entertaining women and men all over the world. They are usually enjoyed at birthday parties and carnivals.