Playing cards are a common motif for tattoos, and they make some great designs. These tattoos can come in a variety of styles. They may represent the love and passion of a person for gambling. Moreover, they may symbolize a number of other specific things. Card tattoos are very common among professional card players and any person that enjoys gambling and games. With all those different things you can do with them, it is very easy to see why they are so popular tattoo choice. 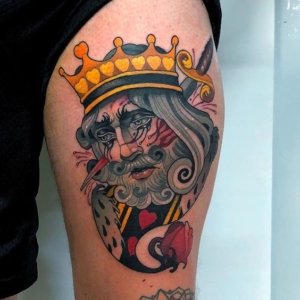 However, before you decide to get a tattoo of playing cards, you have to ensure you understand how they work. I/n the traditional deck, there are 52 cards. There are actually 54, which include two Joker cards. However, these two rarely find their uses in card games. Every card in the card deck is part of four card sets, and those sets are Ace, King, Queen, Jack, 10, 9, 8, 7, 6, 5, 4, 3, and 2. Each card in the set belongs to one of the four suits, which are hearts, spades, diamonds, and clubs.

There are, in fact, many different card hands that people usually choose for their tattoo. One of the most popular hands is the royal flush, which includes five cards – Ace, King, Queen, Jack, and 10. In order for the hand to be a royal flush, all the cards need to be from the same suit.

The royal flash hand is often the symbol of success, winning, and power. Another popular hand is four Aces. The Ace is actually the highest playing card in the whole deck. Four aces will symbolize victory, power, and good luck. Some other popular hands include the full house and straight.

Some people would just like to get a single card tattooed on their skin. There are a few choices when it comes to this particular approach. The most popular is the Ace of Spades, which is actually the top card in most card games. This paying card symbolizes power, winning, leadership, and achievement.

The King of Hearts is actually a playing card in the standard 52-card deck. Modern playing cards are full of layers of meaning and symbolism, which comes several centuries ago.

The ruler that the King of Hearts represents, named Charles, was the only one of the four that was there to see the day his face has been printed on a playing card. This may rationalize why he was different from the other three rulers.

The visage of Charles was put on the King of Hearts at the very start of his rule. However, he never got the chance to come into contact with playing cards until several years later. This happened when he was ill with a fever and was told that he is going to be bedridden until he dies. During that period, Charles started learning card games to pass the time.

The highest-ranking of the face cards in a 52-card deck, the king, is a powerful card in many games. When this card finds its uses in tattoos, it is in combination with other cards, usually in a winning hand. However, this playing card has a literal meaning when used alone. In it, the bearer is the King of Hearts, a royal, but also a kindly ruler of emotions, particularly love.

The King of Hearts is a very powerful symbol. Not just is it naturally a strong card in card games, but it also has deep symbolism.

But, many people that get this tattoo choose to look at it in a different way. As hearts have their associations with love, the King of Hearts often expresses the same sentiment. There are various ways to show this image in order to represent what you want in a tattoo.

Many people consider themselves lovers and not fighters. They also say that they are the king of their own domain. Having this tattoo symbolizes the love that they use in ruling that domain.