Aces tattoo can symbolize a wide variety of things, so that’s why they happen to be some of the most commonly seen playing card tattoos out there. The majorities of people know the ace symbol and immediately can distinguish some of its meanings, but some lesser-known meanings can also be attached to these designs.

The one thing that’s for sure is that every ace tattoo, regardless of the other meanings that people attach to them, represents power. This is because in most playing card games, the ace is the most powerful card that you can get, and it’s the one you’re hoping to find in your hand. As far as the meaning goes, some will get their ace tattoos to show that they feel like they have a lot of power over their lives, while others will get the tattoo design to represent their want for more power and influence in their lives.

When people do want to emphasize the “power” meaning in their aces tattoos, they will usually get the ace of spades in the design. The ace of spades has long been seen as the most powerful of the different ace cards, though in most cases, it does not hold more power than the other aces in the game. Some people like that it contains this meaning, and they get to choose a black version of the ace tattoo, which can sometimes look a bit better on the skin.

The aces tattoo can also represent winning for similar reasons to the ones mentioned above. If you have an ace or two in your hand, that means that you have a pretty great shot at winning that hand in most games that you can play. This is an excellent connotation to use if you take winning seriously, or you are very competitive and want to show that you are confident that you will always end up on top.

The ace is also acknowledged as the “wish” card, so some people get their aces tattoos as a sort of good luck charm on their skin. You can even get the ace in green ink along with a four-leaf clover to make the meaning come through better. There are actually quite a few designs that you can get as good luck charms, but the aces tattoo gives you a unique way of using it. Plus, you can always attach any of the other meanings we’ve mentioned here if they also make sense for you.

Correspondingly, the aces tattoo can represent desire since card players are usually very much hoping to get an ace in their hands. Many people assume that this “desire” meaning is all about sexual desire, but it can represent any type of desire. You can get this tattoo and look at it every time you want to achieve something in your life, such as getting a new job or finding love. This is significant meaning for a lot of people because it covers so much without being too specific.

On the other side, the ace of spades tattoo can also signify death. The reason for this is because aces of spades were often placed in or on the helmets of soldiers during the Vietnam War, which gave them the nickname of “Death Cards.” This is why usually, a full playing card of the ace of spades in designs is combined with a skeleton or some other dark image on the card tattoo design.

Often, people will get just a single card in their aces tattoo, but occasionally the ace is only part of a larger design. It is a straightforward symbol to incorporate in any tattoo, so it’s an easy way to add more meanings into a different design. The implications don’t even have to match the rest of the images in the tattoo, either; you might want to fully define who you are as a person in one tattoo design, and you can just comprise the ace anyplace in it.

Aces tattoos can come in many forms, so you can be creative with your design to ensure that you end up with a unique tattoo motif. You can choose any font that you like, though you will want to make sure that it’s something that you will always be happy with on your skin. You can also very quickly include other images around or below it if you think that makes the design come together better. The aces tattoo is just one of those very everyday symbols that can be designed in thousands of different ways to suit the wearer. 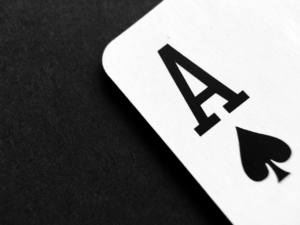 Just like with other playing card tattoos, aces tattoos can be placed anywhere on the body. They can be as tiny as finger tattoos, or they can be big enough so that they fit across an entire back. It’s an excellent idea to know exactly how large you want the tattoo to be ahead, though, so you can get a real feel for how it will appear on your body before you start that process. Most tattoo artists will be happy to help you figure out a great place to put your aces tattoo, and they may even be able to help you come up with an excellent design for it.

You can probably now see why the aces tattoo has been so popular for so long and that there are a bunch of ways that you can make these tattoos look amazing on the skin. They are usually tiny designs, yet they hold deeper meanings than a lot of other tattoo designs out there. If you are thinking about getting an aces tattoo, be sure to draw up multiple designs to choose from and then hire an excellent artist to do the work for you.