Throughout the centuries, different countries have adapted card decks so that the colors, designs, and emblems, as well as card names better reflect customs and cultures. Clubs are, in fact, the suit which has the lowest value in an ordinary deck of playing cards. However, they were connected with money, wealth, luck.

In the United States particularly, the symbols of a usual deck of English cards are called pips, and the modern decks are now displaying the four suits of hearts, as well as diamonds in red, and clubs and spades in black. However, such suits and colors had a long history of evolution. 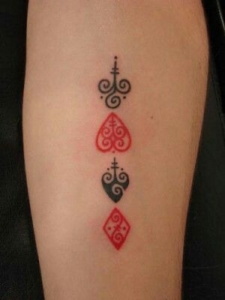 There is no definitive authority on when the playing card was first developed. But, some early reports suggest that the first playing cards were probably used earlier in the 1200s in China, as well as the late 1300s in Europe.

Some reports also say that the first cards were utilized as early as the ninth century. Still, a lot of other reports suggest that the Chinese game of leaves, which holds this title, actually did not use cards, and hence, people debate if that should count as the beginning of playing cards.

There is another belief that the Chinese were the first to utilize suited cards, which were the representation of money. Their suits were coins, strings of coins, myriads of strings, as well as tens of myriads. Also, the Mamluks of Egypt have modified these and passed them along to Europeans in the Middle Ages, around the 1370s.

Another common belief is that the four suits in a deck of modern English playing cards derive from French decks of cards that were developed from the Germanic suits around 1480. In turn, the Germans have adapted their suits from the Latin ones. The names which are currently used stem from English names, some of carried over from the Latin suits.

The Latin suits were cups, clubs, coins, as well as swords. In Italian, the word for sword is a spade and Espadas in Spanish, and that was retained in English too. The ranking of the suits probably ultimately comes from the Chinese tradition, which was more directly connected to value.

In the lends with official German language, the Latin suits were modified in the 15th century. Around 1450, the Swiss-Germans utilized play card suits to represent roses, acorns, bells, as well as shields. But, the Germans changed these to hearts, bells, leaves, and acorns. Despite the changes, the card suit looked similar to each other.

The French suits, which now typically appear in the United States, are another variation of Germanic suits. They keep the hearts, but instead of bells, they use carreaux that are tiles or diamonds. Additionally, there was a crescent suit instead of diamonds prior to the French settled on diamonds. The acorns became trèfles, standing for clovers or clubs. Instead of leaves, they had piques for pikes or spades too.

According to one legend, the French suits represent the four classes. Spades represent nobility, hearts stand for clergy, diamonds represent the vassals or merchants, and clubs are peasants. In the German tradition, bells were the nobility, and leaves were the merchant middle class.

Clubs are one of the four suits of playing cards in one standard French deck. It also corresponds to the suit of acorns in the standard German deck.

The original French name it has is Trèfle, which means clover, and the card symbol depicts a three-leafed clover leaf. The Italian name is Fiori or flower. The English name clubs are derived from the suit of Bastoni in Italian-Spanish suited cards.

The symbol for the suit of clubs depicts a very stylized three-leaf clover with its stalk oriented downwards. Generally, the suit of clubs is black. However, the suit may also be green, for instance, as sometimes utilized in Bridge, where it is one of the two minor suits along with diamonds.

Utilized in tattoo art, the clubs are sometimes shown on a playing card in games o0f chance and sometimes as part of a suite of good luck symbols, particularly those which are connected with gambling.

Because of its interesting and fascinating design, as well as it is represented by the clover plant, this suit in playing cards is a commonly chosen tattoo design by tattoo lovers, as it usually symbolizes good luck, wealth, and money. However, in the end, your tattoo will always symbolize what you want it to symbolize. It is a good tattoo design to choose from, and it can be combined with everything you want.