There is actually a natural affinity between human beings and animals. Many people feel more comfortable when they are around animals. That is because animals don’t have expectations, and it is a complete relief to play with them. This is one of the many reasons why many people love animal tattoos. Not just dogs, cats, but also other wild mammals may form part of some popular animal tattoo designs. Most of these tattoos are rendered in realistic styles, even though some fuse with tribal styles or watercolor. When it comes to placement, animal tattoos could be inked on the chest, back, limbs, arms, etc. There are many different animal tattoo designs, and each of them has its own specific meaning. One such design is the koala tattoo. Below, we are going to discuss more the characteristics of this animal, and its use in tattoo art. 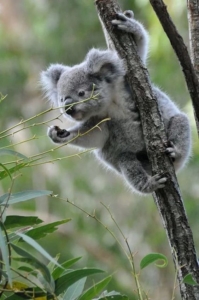 The koala, or koala bear, is an arboreal native to Australia. In fact, it is the only extant representative of the family Phascolarctidae, and its closest living relatives are the wombats. They comprise the family Vombatidae.

The koala lives in coastal areas of the eastern and southern regions of the mainland. It inhabits New South Wales, Queensland, Victoria, and South Australia. We can easily recognize it by its stout, and tailless body, large head with round, fluffy ears, and large spoon-shaped nose.

This animal has a body length of 60-85 cm and weighs 4-5 kg. Color ranges from gray to brown. Koalas from the northern populations are smaller, and also lighter in color than their counterparts further south. These populations are possibly some separate subspecies, but this is disputed.

Koalas usually inhabit some open eucalypt woodlands, while the leaves of these trees make up most of their diet. As this diet has limited caloric and nutritional content, koalas are sedentary and sleep about 20 hours a day. They are asocial animals, and connecting exists just between mothers and offspring.

The adult males communicate with loud bellows that intimidate the rivals and attract mates. They mark their presence with secretions from scent glands found on their chests. As they are marsupials, they give birth to underdeveloped young that crawl into the pouches of their mother, staying for the first six or seven months of their lives. The name of these young koalas is joeys, and they are fully weaned around a year old. Koalas also have several natural predators, as well as parasites, but various pathogens also threaten them.

This tree-dwelling marsupial, sometimes called koala bear, is a favorite one in the stuffed toy market. This is because the real creature already looks like a toy, as it is toy-like and cuddly in appearance.

Feeding on eucalyptus leaves, and carrying their young on their backs, these are slow-moving animals. Moreover, they are sleepy-looking, with large black noses, white underbellies, gray-brown fur coats, and fairly large and fluffy ears. They are native just to Australia, and people can use their image in tattoo art to symbolize this nation.

However, internationally, koala tattoos symbolize kindness and caring nature. Just as a symbol, the koala can symbolize endangered species around the world too.

The exotic charm that these small and charismatic animals have can’t be overstated. Koala tattoos are excellent for the misunderstood sleeping beast inside.

They also display a calm understanding of those who aren’t understood by anyone else. They make their bearers as refreshing and unique individuals. These small creatures are not bears at all, although some call them koala bears. However, this doesn’t mean that they are not powerful wild animals. Generally said, they are very docile and calm. However, when someone provokes them, they will defend themselves and their families.

Far from showing aggression, a lot of introverted tattoo lovers, who look to express their extraordinary attitudes, choose these designs.

Some of the most common meanings that koala tattoos have are the following:

As koalas are calm and easy-going animals and aren’t afraid of people, they can also represent these traits in tattoos. They rarely show aggression, which is another beautiful trait to portray in a tattoo. However, when other animals or people attack them, they will show some aggression, of course.

Koalas love to hug and cuddle. They are not violent creatures at all, and people can almost approach them anytime. They are loving and nice to each other, and they rarely show anger.

Another trait of these animals is that they are lazy. Since their food does not need to be killed to be eaten, their only obligation is finding a eucalyptus tree. After that, they can eat and enjoy the rest of the day.

The general symbolism of koalas is one of calmness, kindness, motherhood, and family. Those who love these tattoos probably have an easy-going attitude in life.