Animal themes are always in trend among people that love tattoos as of their beauty, appeal, as well as rich symbolism. The bear tattoo is a design with the dual nature personifies fury, rigor, valor, courage from one hand, and care, love, protection, wisdom, on the other.

Bears are an increasingly rare, but still undeniably beautiful animal. They live in different habitats all over the world, and they are spiritually important in a lot of different cultures across the planet. In the ancient mythologies, deities were represented by bears; nowadays, they continue to be an important symbol to a lot of people. 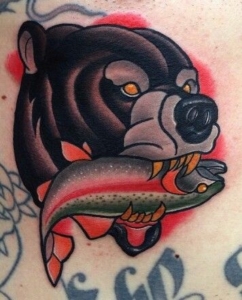 The bear is a carnivore and a large animal that is capable of much ferocity, and it is also a common image in pop culture, as well as in tattoos. It is not much a subject of Oriental tattoo art, but in the West, the bear is actually a symbol of male strength and power, sometimes being associated with authority.

A lot of cultures have various myths about bears – from the Greeks and the Celts to the Ainu of northern Japan and the tribes of North America, as well as back in time to Neanderthal altars of bear skulls in caves.

The bear tattoos originate from the Celtic times when the warriors applied them as a protective emblem, and the women inked them as a sign of motherhood, devotion to family, as well as childbearing.

The bear tattoos are usually chosen by self-assured, ambitious, as well as decisive men who want to highlight their masculinity while women opt for the bear tattoo to reveal their caring nature, love for their family, as well as for their children.

Traditionally, this powerful, dangerous, uncontrolled, and feared animal, like some primal force, is the symbol of brutal violence and awesome nature too.