Crosses represent extremely popular tattoos as of their personal and profound meanings, cultural and historical importance, and easily customizable designs. These tattoos are popular designs among men and women, and they place them almost anywhere on their bodies. They often place this motif on its own or even part of a larger design, which means in combination. Depending on the design, size, and other elements included, the cross represents many different meanings. This makes it an excellent tattoo.

However, although a lot of people assume that crosses have only religious connotations, this isn’t the case. The capacity to add your own personal touch and even integrate other elements and symbols is excellent. It means that it will symbolize various ideas and meanings, which will correspond with the wearer’s personality.

The capacity to customize your design to suit your style and beliefs is one great thing about this tattoo. The variation possibilities are almost endless. While the design on its own is quite a popular choice for many, the design variations which exist demonstrate the opposite. They show how easily you can add other elements or even customize the cross. You can do this to best reflect the meaning that the symbol will hold for you. 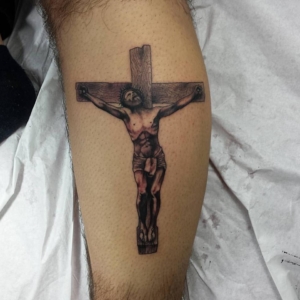 As we already said, these tattoos symbolize many different ideas and meanings. Some of them are Christianity, strength, courage, dedication, honor, death, suffering, spirituality, life, equality, peace, ascension, and so on.

The cross tattoo design we are going to talk about here is the Latin cross tattoo. This type of design is actually the typical cross tattoos many people refer to.

The Latin cross, or Crux immissa, is the type of cross in which the vertical beam sticks above the crossbeam. This, in fact, is the main representation of the cross on which the crucifixion of Jesus Christ happened.

The Latin cross started as a Roman Catholic emblem; however, later, it became the universal symbol of Christianity. When it is displayed upside down, it represents the Cross of St. Peter. This is because he was reputedly executed on this type of design. However, when it is displayed sideways, it represents the Cross of St. Philip for the same reason.

A Latin cross plan is actually a floor plan which many cathedrals and churches possess. When looked at it from above or in plan view, it takes the shape of a Latin cross, or Crux immissa. The Latin cross plans have a nave with chapels or aisles, or both and a transept which forms the arms of the cross. Moreover, it has at least one apse which traditionally faces east. Many even have a narthex at the entry.

Of all the symbols in the Western world, the simple Latin cross is pre-eminent. The use of this motif in history predates Christ. The essential and straightforward crossing of lines of unequal length finds its uses for different purposes. Also, in many cultures, its uses are with all manner of meanings attached.

However, using it as the symbol of the Jesus’ crucifixion, and Christianity, is the meaning which it almost always takes. This is because Christians actually appropriated it in the early centuries of the last millennium.

In that incarnation, the Latin cross symbolizes specific Christian tenets like sin, death, and guilt. However, it also symbolizes salvation, resurrection, and eternal life.

Of all the religious tattoos around the world, this design is undoubtedly the most prevalent and also well-recognized one. This is often because of its simple design, but also for the meanings and ideas that it conveys.

Here are the most common symbolic meanings of these tattoos:

This design symbolizes the Christian faith. Although simple, it can be made to be quite beautiful and ornate. Normally, he contains a clear long vertical line and a smaller plain horizontal line. The horizontal line intersects the vertical one almost a third of the way down. The ends of the beams may include a knotted design too.

The Latin cross tattoos are usually small. While they are often in black or greyscale ink, you may choose to have them in color as well. As a result of their small design, this is a popular tattoo for women, but for men as well. They often ink it on their wrists, ankles, hands, and upper arms.

Cross tattoos are an excellent choice for every tattoo lover. Although they usually find their associations with Christianity, they date back before Christianity even appeared. They have several different meanings beyond Christian symbolism too.