Maori tattoo is an important part of native society, connected with ancestry and a sense of Maori pride. The practice of tattooing is ancient. The tattoo tool was a bone uhi (chisel) with a proper sharp straight edge, which made severe cuts into the skin.

Ta Moko was a painful and very long process, and during the procedure, flute music, as well as chant poems, were performed to help soothe the pain; while marking the body, there were specific prohibitions.

In the past, the Ta Moko tattoos were the traditional representation of particular Maori tribes, but for the one of different heritage and ancestry – this is not the case. However, this tattoo can have a range of other legitimate meanings like your family, prosperity, strength, travel, prosperity, career path, and so on. 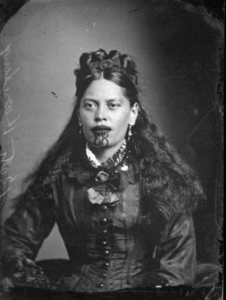 According to the Maori, tattoo art started with a relationship between a  man named Mataora, which means the face of vitality, and the princess of the Underworld named Niwareka.

However, one-day, Mataora beat Niwareka, and she left him, running back to the realm of her father, named Uetonga.

Mataora, overflown with heartbreak followed after his princess. After several trials, and after overcoming a lot of obstacles, Mataora arrived at the realm of her father, but his face pain messed and dirty after his voyage. The family of the princess taunted and mocked Mataora for his unkempt appearance.

In his very humble state, he begged the princess for forgiveness, which she accepted. The father of Niwaraka then offered to teach Mataora the art of tattooing, and at the same time, he also learned the art of Taniko, which is a plating of cloak borders in different colors.

Mataora and his princess returned together to the human world, bringing with them the arts of Ta Moko and Taniko.

The Western and the Eastern Pacific method of tattooing is based on the use of the broad-toothed combs of varying widths called uhi, dipped in the dark pigment, and struck into the skin with some small mallets which are known as tā. The teeth of the comb pierce the skin, as well as deposit the pigment. Maori brought the method of tattooing with them from Eastern Polynesia.

As the art and the practice of Ta Moko developed in isolation in Aotearoa New Zealand, Maori pioneered the use of the smaller and narrower uhu without teeth, which cut grooves through the skin. The process has been followed by the application of some small and toothed uhu combs which applied the pigment. This method of Ta Moko applied to the face is a form of scarification, which in practice is very similar to wood carving, and is characterized by deep and grooved furrows, stained with dark pigment.

The bone chisels utilized for tattooing can be found in archaeological sites of different ages in New Zealand and some early Eastern Polynesian sites too. Even though the Maori practiced tattooing, there is no evidence that the Moriori people did. In New Zealand, it is in the early sites that the widest chisel blades were found, and this gives the evidence to the theory that there was a preference towards rectilinear tattoo patterns in earlier times.

The head has been considered the most sacred part of the body, and as tattooing caused blood to run, the tattoo craftsmen were very tapu persons. All high-ranking Maori have been tattooed, and those that went without tattoos were seen as people of no social status. Tattooing started at puberty, accompanied by several rites and rituals. Additionally, to making a warrior attractive to women, the tattoo practice also marked both rites of passage and important events in the life of the person.

There were also several prohibitions during the process of tattooing, and for the facial tattoo in particular sexual intimacy and the eating of solid foods were prohibited. To overcome all this, liquid food and water were drained into a wooden funnel, to make sure that no contaminating product came into contact with the swollen skin. This was, in fact, the only way the tattooed person could eat until his or her wounds healed. The full-faced tattoo has been time-consuming, and a good tattoo craftsman would carefully study the bone structure of the person before starting with his art.

So, Ta Moko is the permanent marking of the face and the body as traditionally practiced by the Maori indigenous people of New Zealand. The marks generally were spirals drawn with great nicety and even elegance. One of the sides corresponds with the other.

The marks of the body resemble foliage in old chased ornaments, convolutions of filigree work. Still, in these, they had such a luxury of forms that of a hundred which at first seemed the same no two were formed alike on close examination.

Ta Moko was similar to a passport or identity card. For men, it showed their rank, status, and ferocity or virility. The position of the wearer of power and authority could also be intensely recognized in Ta Moko.

Several other outward signs, in combination with several Ta Moko, could instantly define the identity card of the person. For instance, a chief with Ta Moko and at the same time wearing a dog cloak could be identified as a person of authority, in charge of warriors. These were the undeniable signs of the identity card.

The significance and meaning of these design motifs seem to be a complex interplay between high aesthetic and a visual language, which underscores artistic identity, excellence, and role.

A lot of the design motifs were universal, particularly the spiral elements applied from the nose to the mouth. The rest of the elements were carefully chosen to accentuate and enhance the individual features that give meaning to the expression Mataora, the living face.

Ta Moko can even indicate social status, role, and expressions of identity through genealogy, but it remains unclear until today.