Meaning and symbolism of the ankh tattoo can be symbolized from the idea of life, as well as rebirth. The ankh is an example of a symbol that has completely transcended its culture and heritage and is still uniquely associated with it.

This hieroglyphic symbol has been used by the ancient Egyptians in order to signify eternal life, rebirth, as well as the union between male and female. It was probably in use as early as 3000 B.C.E., and it is a symbol that is associated with Imhotep, a physician for the family of the pharaoh, who later become the God of medicine, as well as healing. It is a subject which is repeated a lot of times throughout centuries of Egyptian art. The Egyptian ankh can also be used alone or in conjunction with some other symbols in order to form the design of a tattoo. 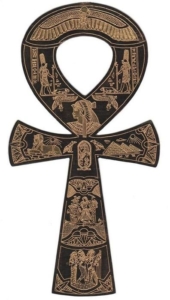 The ankh symbol is also known as the staff sign, the key of life, the key of the Nile, as well as the symbol for a sexual union for life. It was associated with Egyptian goddess Hathor and even with Christ as a symbol of eternal life. A part of its enormous appeal is in the expression of opposites in its composition and the active, as well as passive qualities of the loop over which is over the cross. Both the gods, as well as the recently dead of ancient Egypt are shown grasping it by the loop, sometimes upside down, using it as a key. In all of its basic uses, it is fundamentally a sign of life that is unending.

The Egyptian ankh is an excellent symbol for both small, as well as large tattoos, as the balance of the design is going to hold detail well at any scale. Choosing an ankh as a designed or a part of a larger piece adds a touch of history, as well as deep meaning to your tattoo.