Tattooing is a sacred ceremony and practice in the Polynesian culture and has a long and rich history with the help of many colorful symbols. The tattoos, as well as their location on the body, were determined by the genealogy, and position of the person within the society and the personal achievements.

Here, we are going to talk about ten Polynesian symbols and images used in tattoo art, and what do they mean:

Tiki is the human-like figure that represents the Polynesian semi-gods, which means defined ancestors and heads that got sublimed after the death. According to the guardian role that it has, it mainly symbolizes protection.

Tiki plays a really important role in Polynesian culture. The origins of Tiki are usually separately drawn to represent different meanings. For instance, nose symbols mean sniffing danger before it is coming. The eyes, nose, and mouth of Tiki and side faces are all significant design elements, and most Polynesian tattoo designs contain one or more Tiki symbols.

In the Polynesian tattoo designs, shells are quite common in a lot of designs, particularly the turtle shells. The turtle shell is a symbolization of turtle, which is quite an important sea creature in all of the cultures of the Polynesian triangle. It also has more meanings than some other symbols. Some complex turtle designs could also have a lot of meanings, according to its elements embedded in. They are the symbol of longevity, fertility, wellness, and peace.

Other shell symbols are mainly seashells. They usually have a lot of variations and stylizations. Seashells are the main source of works of art. Seashells are usually the symbol of shield, intimacy, and protection. Compared to some other Polynesian symbols, the seashells are not commonly present in a lot of tattoo designs.

The Marquesan cross is another symbol that is quite popular and widely utilized in a lot of Polynesian tattoo designs. It is usually utilized to symbolize the balance between harmony and elements. Its origin is also unknown, but according to some archaeological study, it has its association with a turtle shell. 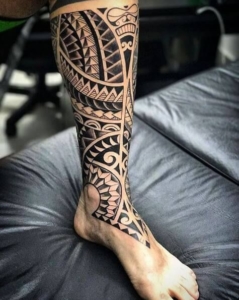 Sometimes, it can be confused with variation or stylization of the lizard symbols. One method to distinguish them is to find out whether the symbol has a “tail” and “head.”

Some human figures, which are otherwise known as Enata in Marquesan language, represent men, women, as well as god sometimes. They can also be placed within a tattoo to represent people and their relations. If we place them upside down, then they can be utilized to represent defeated enemies.

Shark teeth or the niho mano deserve a space of their own. Sharks are definitely one of the favorite forms that aumakua choose to appear to man. They also represent protection, strength and guidance, and even ferocity. However, they are symbols of adaptability in many different cultures.

The meanings of the Polynesian tattoo designs that include the Sun may vary from one design to another, according to the use of the symbols which constitute the edge of the Sun.

The ocean symbols are quite common among the Polynesian tattoo designs. They are often utilized to not just express specific meanings but to fill some blocks in order to shape complete patterns. Polynesians regarded the ocean as their final destination where they go when they pass away.

Sometimes, the ocean can be a symbol of death, or the world beyond. Besides that, it is also seen as the source of food and may represent life, persistence, and fertility. Ocean waves find their uses as the symbol of another world beyond, which is the homeland where all the ancestors live.

The lizards are very powerful creatures that bring good luck, communicate between the gods and humans and who can access the invisible world. However, they can also bring death and bad omens to the people that are disrespectful.

The symbols of spearheads in Polynesian tattoo art present in almost every Polynesian tattoo design. It is actually designed to express courage and fight. Also, it is utilized to represent warrior, sharp items, as well as a string of animals and rays.

Spearheads can be used in combination with other symbols in order to express certain meanings. For instance, one line of spearheads and one line of Enatas upside down together its side can express the meaning of defeating enemies.

The stingray tattoos come in a few variations and styles; the image may hold symbolic meanings. The stingray has the capacity to hide in the underwater sands, mainly from sharks, and can cover up with sand and lay still. Most of the sharks can sense prey in the sand, based on the movement but for the most part the stingray can hide, and for this reason, its image represents the symbol of protection. Some other meanings and symbolism of the stingray tattoo are adaptation, peacefulness, danger, stealth, speed, agility, and gracefulness.