There are different kinds of panda tattoo designs. Some of them portray the pandas as cute and cuddly and others, big and fierce. When you look at giant pandas, they look harmless. They are always playing and fooling around. However, they can turn on a dime if something threatens their cubs. Their personalities are the reason why they are so popular in the tattoo realm. Many people choose to get the giant panda tattoo because they can draw from many parts of their personalities. 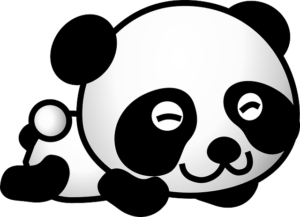 There are different meanings behind a panda tattoo. It depends on the person wearing the tattoo. The love for these cute animals is another reason why people get it as a tattoo. There is also a lot of symbolism attributed to the panda, and some might look to get the tattoo because of that. The reason is not essential because the tattoo is yours, and no one can tell you why to get it.

The giant pandas are recognizable for their black and white coloring. This animal is native to China. Pandas have black ears and black rings around their eyes. Some parts of their body are colored white as well, while their legs are black.

Pandas spend their lives walking around on the forest floor and eating bamboo. Moreover, they are capable of swimming, and they are fantastic climbers. Giant pandas try to avoid conflict with other pandas and animals. They avoid running into anything that might cause them to have to fight. Because they mark their territories makes it easier to avoid other pandas in the wild. Instead of roaring like other bears, the panda does more of bark or bleat like a goat. All of this information can be crucial when choosing or designing your panda tattoo design.

Pandas spend around 14 hours a day just eating. These animals need to consume about 40% of their body weight every day. Bamboo is low in fibers and high in nutrition, and that is why pandas love it. They also eat the shoots, leaves, and stems of the bamboo.

Pandas are excellent tree climbers. They do it to evade threat, win the favor of a female, and get away from stronger pandas. They are a nosy animal and are known to take things from villages to play with and later discard them.

They are also very passive animals. The attack on humans by pandas is so rare. Moreover, they sometimes cover their face during the first contact with a human. The only thing you should avoid is going near their cubs because they will burst into a rage at that point.

There is a lot of meaning inside the panda tattoo; how the panda is portrayed influences its purpose. However, for the most part, the symbolism of the panda tattoo coincides with their personalities.

These tattoos represent both feminine and masculine traits. The panda tattoo also symbolizes a kind of yin yang and balance. Their fur’s black and white colors are another example of the balance of colors on their body. They also have a very keeled personality, which most might be called balanced.

The panda is a playful and nosy animal, and those with this tattoo design might reveal that part of their personality. The panda can be violent if it needs to be, but they usually avoid confrontation if they can. The panda tattoo design is a fun-loving tattoo that can appeal to the playful side of your personality. If you enjoy lying around, eating, and relaxing, this tattoo motif is perfect for you.

There are different variations of these tattoos, and their look defines the meaning. Below are some examples of panda tattoos.

The rolling or playing panda tattoo is a symbol of the fun-loving nature of the panda. Through this tattoo, you are trying to detain that part of their personality and keep it playful. It is an excellent outlook on life, and having this tattoo is a reminder to stay cheerful, like the panda.

The Kung Fu Panda design comes from the movie starring Jack Black. In this movie, Jack Black lends his voice to a fun-loving panda that learns kung fu. This panda uses its skills to stop evil. His personality in this movie is a lot like the playful panda. People who are fans of the show can get this tattoo.

Some people want to portray the giant panda with a fierce look. The reason for that is to let onlookers know that when pushed, you can be aggressive. The giant panda is often a playful and solitary animal that would instead run away than fight. However, if provoked, the panda can be fierce. This tattoo motif is a symbol of both parts of the personality.

These are only a few designs of panda tattoos. You can use some of the information that we’ve discussed to create your very own panda tattoo for you to enjoy.