As one of the oldest pets, Cyprus domesticated felines in around 9500BC. Over the centuries, they have assumed a special role in the lives of human beings. For example, ancient Egyptians believed that cats were the incarnated goddess of the Sun and the Moon. Also, sailors brought kittens aboard to make sure they will have a safe journey. From the earliest days of humanity, we have made tireless efforts to tame almost every animal. However, nothing beats to deep love and understand that we have developed for our moody house cats. Just like we already mentioned, historical records say that Cyprus is the country that domesticated cats for the first time. However, the practice of keeping a cat as a house pet only became commonplace in ancient Egypt at around 3600BC. Also, the spread of the Roman Empire introduced this concept to much of Europe and Asia. Thanks to the adventures of the maritime nations like France, England, Portugal, and Spain, the New World started loving the house cat. They find their association with good luck. However, one feline animal, which is still in the wild, is the leopard. Leopards and leopard spots are a very common theme in tattoo art. Because of their beauty and because of the meanings related to this animal, they form very important tattoo designs. 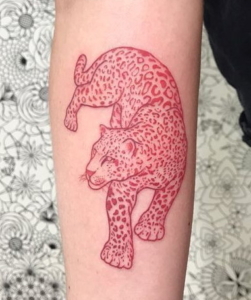 The leopard is one of the extant species in the genus called Panthera, being a member of the Felidae. It appears in a wide range of areas in sub-Saharan Africa, in small parts of Central and Western Asia. Also, it is present on the Indian subcontinent to Southeast and East Asia.

The IUCN Red List actually lists this animal as vulnerable, because leopard populations may suffer from habitat loss and fragmentation in the future. They are declining in large parts of the global range.

For example, in Hong Kong, Kuwait, Singapore, Syria, Tunisia, Libya, and probably in Morocco, leopard populations are already extirpated. Contemporary records also suggest that the leopard occurs in just 25% of its historical global range. Hunters can legally hunt leopards, and their body parts are smuggled in the wildlife trade for decoration and medicinal practices.

In comparison with other wild cats, this one has relatively short legs and a long body with a large skull. The so-called rosettes mark its fur. It is similar physically to the Jaguar but has a smaller and lighter physique. Also, its rosettes are generally smaller, without central spots.

Like the cougar and jaguar, the leopard is the animal companion of the shamans in the Western and Eastern hemispheres. Also, like the cheetah, another spotted big cat, the leopard symbolized aggressive warrior and kingly castes.

The priests of Egypt were wearing leopard skin to ward off evil spirits. However, it is the wild animal itself that permeates the images of this creature in tattoos.

Leopards are beautiful and graceful animals. Its noble and bold look, sweeping, powerful paws and unbelievably flexible body are just mesmerizing. Leopard tattoos are very popular among both men and women. They usually symbolize elegance and power.

However, there are some other common meanings and symbolism related to this tattoo, such as:

In Christianity, this animal was the symbol of sin, the accomplice of the devil. Among the Neolithic cultures of Asia Minor, it was the sign of female fertility deity. In ancient times, people believed that the leopard is a product of a panther and a lion. This was the symbol of loyalty, vitality, and ferocity.

Also, like a monkey and a tiger, the leopard expresses power. In early Christian mythology, this animal was a sea monster. In some myths, it symbolizes male friendship.

Leopard tattoos come in different sizes, but the color scheme of these designs is often standard. These tattoos are usually present in the colors which resemble the actual leopard spots. They can also be with a tribal motif. Sure, the most popular variation is the leopard print, which is usually common among both men and women.

Those people that enjoy the solitary life often do leopard tattoos. They actually love the inner tranquility and peace that comes from being outside of the daily rat race. They also hate being herded around in the masses. People with these tattoos identify with the peaceful and quiet life of this animal.

Another thing related to this tattoo design is to think about their placement on your body. Putting your leopard tattoo on a section with large muscle will add a new dimension to your design. This will also give your body art the illusion of movement.

The best way you can communicate your spiritual message to the world is through your body art. That’s why choosing the leopard tattoo design will be the best choice you will make. However, consider other things before getting it in order to make sure it corresponds to your personality.