The best stories ever are those for the Greek gods. The amusing part about hearing these stories is that these characters are superheroes before existence. The godly powers are something we could only wish for. This made for pretty badass stories that we still talk about today. However, not all characters from Greek mythology are god ones. Some are humans, and others are demigods. One famous demigod, half-human, half-god, is Perseus. He is the best warrior in Greek mythology and the legendary slayer of monsters. Although not a full god, he is still one of Greek mythology’s most popular subjects ever. 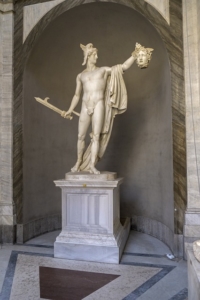 A tattoo of Perseus tells a story and represents traits and characteristics that any person would love to have. The symbolism behind this tattoo led to many more people getting his image tattooed on their bodies.

Perseus was the offspring of Danaë and Zeus. Because his mother was a human, he was a demigod. The story of Perseus is a story of bravery. It all started with Danaë’s father’s disappointment and the King of Argos for not having a son. He was so disappointed that he even went to speak to the oracle at Delphi. The prophet warned Acrisius about his death from the son of Danaë. Because of this, Acrisius locked up his daughter in a bronze chamber that was open to the sky. This is important since Zeus came in through the opening as a shower of gold and impregnated Danaë. This is how he was born, and the journey begins.

Afraid for his life, Acrisius imprisoned Perseus and Danaë in a wooden chest and sent them out to see. This was his choice instead of killing the son of Zeus. He arrived with Danaë on the island of Serifos. Dictys was the one who accepted them and raised Perseus into manhood.

Polydectes, the king of the island and brother of Dictys, was in love with Danaë. However, Perseus was against that and protected his mother from the advances of Polydectes. Because of that, Polydectes created a plan to get rid of the island and himself of Perseus. He did that by having a banquet and asking all guests to bring a horse as a gift to Hippodamia. Because Perseus had no horse to give, Polydectes would send him away. However, he was smart and said he would provide Polydectes any gift he wanted. Polydectes asked for something he considered the impossible-the head of Medusa. However, Perseus accepted the challenge.

To defeat Medusa, Perseus had to locate the Hesperides who held weapons capable of killing Medusa. In his pursuit to find the Hesperides, Perseus visited the Graeae, Medusa, and the Gorgons’ sisters. The Graeae were three older women with only one eyeball that they pass back and forth. Although they knew the location of the Hesperides, they weren’t willing to tell. Perseus was smart enough to snatch the eyeball and make them lead him to the Hesperides.

The Hesperides gave him a bag where he would put Medusa’s head. Perseus received the helm of darkness from Hades to hide. Zeus gave him an adamantine sword. He was given winged sandals from Hermes and a polished shield from Athena. These are the weapons Perseus went to find Medusa with. He used the shiny shield to see her reflection and sneak up while sleeping to take her head.

This is how this demigod received his fame. It’s what he’s most well known for and the most important reason for people to get Perseus tattoo.

The Perseus tattoo’s meaning depends on the owner of the tattoo and what part you focus on. This tattoo motif can symbolize the relationship with the mother. In reality, he had to kill Medusa to save his mother. If it weren’t for her, Perseus would have never made the journey to kill the snake-haired monster.

He is also a hero for saving Andromeda from the monster called Cetus. Andromeda was tied to a rock as a forfeit to Cetus to stop attacking the kingdom of Aethiopia. Perseus was competent to save her from the rock and slay the monster. This kind of tattoo serves as a symbol of protecting women.

Besides, Perseus is famous for using the head of Medusa to turn his enemies to stone. Some of this came from a place of revenge. As a result, Perseus’s tattoo holding Medusa’s head is a symbol of vengeance or wrath.

Perseus has a brilliant story with a lot of plots and themes within. This is why he is such an excellent subject for a tattoo. In a lot of tattoos, he is shown in a sort of realistic fashion. No matter which stole or part of the story you choose, you will have a truly unique tattoo. A kind of tattoo that you will never regret getting in the first place.