Human beings love to hear stories. From childhood, listening to stories from our parents before sleeping has become a norm or tradition in society. Such stories include daredevil adventures of heroes that achieve impossible tasks. There are stories in which heroes also rescue beautiful princesses. In these tasks and rescues, they engage in battles with monsters and evil creatures. Mythological stories from worldwide have no shortage of this type of tale. Greek mythology is definitely the treasure of such tales. The culture which gave birth to Greek mythologies vanished from Greece long ago. Right now, a few archeological relics in the form of sculptures in museums worldwide give evidence of the Greek civilization. 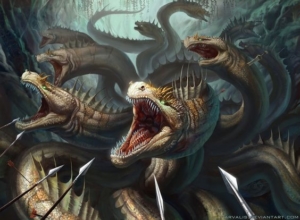 Greek mythology tattoos are the motif of images of Greek heroes, gods and goddesses, monsters and evil creatures. They even come as a motif from different incidents and stories. These tattoos symbolize the universal appeal of bedtime stories. Furthermore, they stand for the love of adventure, conquer the unknown and dangers. They even stand for strength and admiration for lost civilizations.

There are many different tattoo designs that Greek mythology inspires, but here, we will talk about Hydra tattoos. Below, we will see what does the Hydra represents and what does it symbolize in tattoos.

In Greek mythology, the hydra or also the Lernaean Hydra was the serpent-like monster. According to Theogony 313, the Hydra is actually the child of Typhon and Echidna. The Hydra had various heads. If you cut off one of the heads, two more would grow back in its place.

Moreover, it was said that the teeth of the Hydra had the ability to raise skeletons from the dead. There are even pictures of the Hydra on vases and bronze plates, which date back from the 7th century BC.

Hercules, who is Heracles in Greek mythology, kills the Hydra as one of his labors. This creature lived in the lake of Lerna in the Argolis. The lake is older than the Mycenean city of Argos. Lerna was also the place of the myth of the Danaids.

The second of the twelve labors that Hercules had was to kill the Hydra. The monster even had one immortal head, which was in the middle. All of the heads could actually spit deadly acid. In order to defeat the Hydra, Hercules asked his nephew Iolaus for help. As soon as he cut off one head, his nephew cauterized the wound with a flaming torch. He did that in order to prevent the growth of another head.

After removing the immortal head of the Hydra, Hercules buried it under a large rock. After that, he collected the poisonous blood of the monster. In later adventures, he dipped his arrows in the blood in order to kill some other monster. The Hydra is present in various Greek tales.

Just like we already mentioned, the Hydra is the mythic serpent-headed monster of Greek legends and tales. If you cut one head off, two heads will grow in its place. Hercules is the only person that succeeded in defeating the Hydra, with the help of his nephew.

After that, he used the blood of this monster to dip arrows, making them poisonous, and killing other creatures. The Hydra heads represent the different vices to which humans are prone. Despite the valiant attempts to escape those rampant desires, its heads grow again. Contact with vice, like the poisonous arrows, can be corrupting too.

The Hydra is the fearful beast with seven heads and long serpentine necks. Mentions of this monster are present in the tale of Hercules and Jason, as Hercules killed it, in order to get the magical golden fleece. Hydra tattoos are quite popular Greek mythology tattoo designs which are present among tattoo lovers. These tattoos are usually common among people who find interests in Greek mythology and its creatures. Or, it can also be present among people who really love monsters like the Hydra.

Generally said, Hydra tattoos may symbolize fearfulness, long life, immortality, and danger. They may symbolize immortality because of the middle head of the Hydra, which is immortal. However, as Hercules defeated the Hydra, and managed to kill the immortal head, this symbolism is not very common.

We can say that Greek mythology supplies some of the brawniest body art imaginable. Moreover, Greek mythology may be the most inspiring one when it comes to irreplaceable and beautiful tattoo designs. It is abundant with gods and goddesses, creatures and evil spirits and monsters, which look perfect on human skin.