Rockets are inventions that both amazed and mystified humans since their creation. The fact that they are vehicles directly launched into the depths of outer space is why they are so enigmatic for people living on this planet. However, not many people know that these inventions were not originally designed for flying into space or space exploration. Rockets were first invented in the 13th century as a weapon adopted and used by the Mongols during the Mongol invasions to the Middle East and Europe. 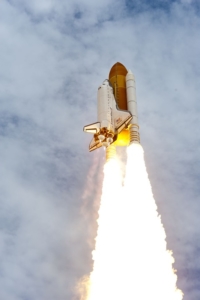 A whole new era for space study and inventive rocket technology was opened during the ‘Cold War’ in 1960 when both the Soviet Union and the United States were at the race to prove who could build the better rocket and be the first to fly to the Moon. In dictionaries, the word ‘rocket’ comes from the Italian word ‘rocchetto’ with a reference to its cylindrical shape.

These sensational creations are also popular among people as tattoo designs, equally sported by both men and women. People choose this kind of tattoo design for different reasons. For instance, some of them choose a rocket tattoo in order to express their love for space. However, just like other tattoo designs, a rocket tattoo holds diverse symbolic meaning. A rocket represents the universal symbol of space exploration, therefore a rocket inked on the skin can symbolize knowledge, limitless, magic, progress, uplifting, forward, adventure, advancement, etc. As previously mentioned, in the past rockets represented both war-making and a race to reach space, while today they hold a nostalgic view of that time of adventure.

It is fascinating how rocket tattoos can be designed with a variety of different elements. Anything associated with the heavens and sky can be used as a design for a rocker tattoo, such as clouds, stars, moons, planets, etc. The rocket can be designed with or without a tail fire coming from the rocket. When you think about space and rockets, usually you have color on your mind and that is why rocket tattoo designs are most frequently colorful and designed in cartoon format. The color is one of the best features of rocket tattoos. Very often, rocket designs include the sky in beautiful blue or black shades. But this is not always the case and sometimes rocket tattoos may be designed with less color and no background at all but with more detail.  Furthermore, rocket inks can come in different shapes and sizes. Because of that, a rocket tattoo can be inserted anywhere on the body. They can be inked on the arms, legs, chest, back, shoulders or neck. Despite the fact that the rocket comes in a basic shape, there are a variety of different ways how to be creative and add a unique twist to your rocket tattoo. The amazing trail art found in most of the rocket tattoo designs is another reason why people choose this type of ink. This graphic art can really make a perfect tattoo that stands out and when done properly can seem as the rocket comes to life.

Just like the case with any other tattoo, there are a few things to consider before you decide to get your rocket tattoo. First of all, you need to take time to research your tattoo and make sure that you completely understand what your tattoo stands for and represents. This is important because sometimes you can discover that your tattoo symbolizes something entirely different from what you initially had in mind. Next, you should never rush to get inked. Some men and women decide to get inked without prior thought. This is wrong because you should always take time to think out everything and properly weight out your options such as the symbol, meaning, body position and everything in between. A tattoo is something that you’re going to wear for the rest of your life and although there are laser removal and cover-ups you should make the right decision from the beginning.

As previously mentioned, a rocket tattoo is a great choice for both men and women who are into stars and planets or just interested and looking for a beautiful colorful design of the tattoo. This type of ink is also a great start for those interested in science fiction or astrology. Moreover, the rocket tattoo is a great place to start for a science fiction tattoo design.

After everything said, a rocket tattoo is one that is definitely fun and interesting to get tattooed. Just like any other tattoo symbol, the rocked tattoo holds symbolic value to the men and women that wear this unique design. The tattoo can represent anything mentioned before. However, at the end of the day, your rocket tattoo symbolizes whatever you want it to.