Tattooing is popular in the Western culture thanks to the sailors of the 1700s, who were inspired by the native tattooed people they encountered when visiting the islands of Polynesian, south of Pacific. It is believed that the word itself originates from the Tahitian ‘tataw’- an onomatopoeic word mimicking the sound of the Polynesian tattooing tools. Life at sea was never easy and full of danger on a regular basis. This situation constantly tested the nerves of the sailors. 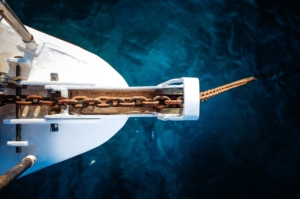 Being aware that at any moment, a storm could blast them into a watery grave turned sailors into very superstitious people. The symbols that they had inked on their bodies were more than just souvenirs from the lands they visited. They told the story of where a sailor had traveled or was used as good luck charms or protective talismans,  and it was not long before they were turned into an extraordinarily elaborate set of tattoo symbols that spoke a language all of their own.

For instance, seeing a sailor with a tattoo of a turtle on its back legs suggested that he had been to the equator, and if he had a rope tattooed around his wrist, that would mean that he was probably a dockhand. Moreover, across on the sole of each foot was supposed to ward off hungry sharks should you be cast overboard, while an image of the North Star would ensure that you could always find your way home. It is a common knowledge that pig and rooster tattoos meant safety in the event of a shipwreck.

Nevertheless, there were many horrible ways to die at sea back in the day from cabin fever, doldrums, exposure, to a shark attack and pirates. However, the deadliest fate that dominated the minds of sailors was definitely the fear of drowning. During the 1800s and into the early 20th century there were thousands of shipwrecks recorded. There were very few people who survived to tell about being deserted, but those who did often commemorated their survival and the deaths of their shipmates by getting sailor’s grave tattoos. Although today most of the tattoo wearers are not sailors, the motif remained very popular.

There are many different designs in various shapes and sizes of the sailor’s grave tattoos, but the image of halfway-submerged masts rising out of the ocean is their defining feature. As time passed, tattooists have incorporated all sorts of other classic motifs around this central figure to complicate its meaning.  When bordered by an anchor, it symbolized how any sense of security is an illusion when at the mercy of the waves. An eagle on the other side suggests that there’s honor in going down with the ship. One of the most important changes in the design comes from Sailor Jerry, who had the bright idea of putting one of these sinking ships inside a bottle of booze to make a statement about how alcoholism claimed more mariners’ lives than the sea with the decline of the shipping industry.

The fact that the naval context in which it was born is no longer a part of most traditional tattoo enthusiasts’ lives, tattoo artists have been forced to push the sailor’s grave tattoo design to new horizons, pairing it with images that better suit our day and age. In the past, sailor’s grave tattoos served as sailor memorials, and it commemorated the men and ships that have been lost.

Today, no matter how much artists modernize the motif to make it trendy, it still stands for what it always has, and that is for sending a powerful message that life is an adventure with death nipping from any corner. The sailor’s grave tattoo designs and all the other parts of the maritime school are typically done with heavy outlines, bright colors, and dark shading.