Satyrs are popular in Greek mythology. The word ‘satyr’ originates from the Greek ‘satyroi’ and has an uncertain meaning.  A satyr represents a mythological creature, half man half goat (with the tail, ears, hooves, and sometimes even phallus), which lived in the woods, mountains, and wilderness even before the time of the Greeks.

They are the symbolic image of fertility and the force of Nature, which regenerates season after season, year after year in a continuous cycle. Satyrs are famous as figures of compulsive behaviors. Satyrs were portrayed among the followers of Bacchus, the god of wine, and the associated drama festivals included bawdy farces known as “satyr plays” (the origin of the word “satire”). Satyrs were mainly known for their pursuit of sexual gratification, chasing after Nymphs in the forest. They were expert musicians and loved to play the flute all day long.

The great minds of that time, such as politicians, philosophers, and military commanders, saw in them an impression of an ancestral pre-Hellenistic culture that was still alive in the lower orders in society and total contrast with the civilized, rational thinking represented by the figure of Apollo. The Satyr is ruled only by his basic instincts indeed (drinking, dancing, playing music, mating, pleasure, and so on), which lead him to uncontrolled, compulsive behavior. However, the new Hellenic Man tended towards the exact opposite, taking a philosophical/speculative approach, which often verged on the obsessive in so far as it utterly lacked in those instincts to be found in the Satyr.

One of the most famous satyrs in history is Pan. In ancient Greek and Greco-Egypt, the God Pan represented “all things.” The name Pan comes from an old word that means to close or join together.  Pan is the universal agent famous for being phosphorus that gives light and life to the world. Similar to phosphorus and what he does here on earth, God Pan was often considered as the great principle of vegetable and animal life. The ancient town of Pan was referred to as Panopolis. Pan was recognized as the god of shepherds as well as being the god of the wilderness, hunting, and folk music. His name originates from the ancient Greek paein, which derived from the verb “to pasture.” He ruled over Arcadia and was considered to be a symbol of fertility, rebirth, and the arrival of spring. Ancient Greek history says that Pan was also adored by the Egyptians. His statues could be seen in all the temples that, to his honor, were built in Thebes, the city of Chemmis (Egypt), that is, the city of Pan or Panopolis. However, there was no place in all the world where Pan was more honored than in Ancient Greece, in a town called Arcadia (Arkadia), which was part of the administrative region of the Peloponnese. It was believed that Pan resides chiefly in Arcadia, in woods, and the most rugged mountains. In geography, ancient Arcadia occupied the hills at the center of the Peloponnese. This is why Peloponnese could be considered highlanders, much like the goat is the highlander of animals, and this could probably be one of the reasons why the goat was chosen as their main symbol. Pan had a tendency of terrifying the inhabitants of the adjacent country, even when he was nowhere to be seen. 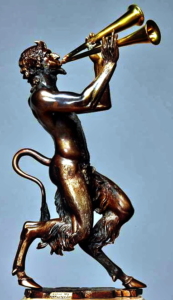 Although many of the religious organizations rejected this Satyr, the myth of Pan managed to survive throughout history until it experienced a sort of second youth at the turn of the Twentieth Century. The scholar Patricia Merivale emphasized that between 1890 and 1926, there was an incredible and unexpected renewed interest in this figure. Pan appeared in poems, novels, and children’s books, and in fact, many critics believe him to have been the inspiration for the famous figure Peter Pan. He is described as the “piper at the gates of dawn,” which in 1967 was also the title of the debut album of Pink Floyd whose own minstrel Syd Barrett brought the legend into the psychedelic era. In his novella ‘The Great God Pan,’ published in 1894, Arthur Machen shows us how our world might look if we could see it as it is, through the eyes of the Great God Pan. And for many critics, including the popular author Stephen King, Machen’s tale is one of the greatest horror stories of all time.

In Roman history, Satyrs were often confused with Genies, minor divinities who protected woods and pastures. In ancient Italy, they were seen as hairy creatures, with little horns on their heads and goat’s hooves instead of feet. It is told that the pre-Roman peoples worshiped them for their joyous, hedonistic, and lustful ways. Satyrs were also the favorite companions of the god Bacchus and, together with the Bacchantes, wandered merrily over the hill and dale indulging in orgies and nocturnal feasts. They lived a charmed carefree life, hated by those uptight individuals who understood neither their lifestyle nor the so-called “unknown” in general.

Nowadays, satyrs are popular in the tattooing world due to their unique design. This tattoo design is a perfect choice for people interested in Greek mythology or myth believers. Furthermore, they are an excellent choice for both men and women fascinated by this mythological creature and their freedom in Nature.