There are a lot of themes and subjects that people can choose from for their tattoos, and when someone selects a pair of scissors, in particular, they must have some significance for that person. There are a lot of reasons worth mentioning why someone will decide to get such a tattoo. No matter whether the source comes from a dream or represents a hobby, the scissors’ tattoo is starting to become a pretty cool tattoo to wear on your body.

We can trace back the origin of the scissors about three to four thousand years ago in Mesopotamia. During that time, these objects were known as spring trimmers and were made of two blades made of bronze joined at a handle by a flexible, thin strip of bronze that is curved, and its function was to hold the blades in a position where they could be squeezed together, and when you let go, they come back apart.

Until the 16th century, spring scissors were only used in Europe. Though, The Romans invented pivoted scissors of the iron or bronze around 100 AD. These tools included blades that were rotated at a point between the handles and the tips, and they were the closest ancestor to the modern scissors.

If you go around and ask people with scissors tattoos what their tattoos mean for them, you will receive different answers from every one of them. As with most tattoos, many of the images that get tattooed are having unique meaning to that person. However, there are some qualities and symbolism attached to the scissors’ tattoo.

There are several meanings of the scissor tattoos that are familiar to us. The most basic purpose behind this tattoo is cutting out the waste in our lives. Now that could mean different things to you. It could mean something in a more general sense, like cutting the non-essential things out of our lives, but at the same time, it can be more specific than that. You might only wish to cut pessimistic people or negative ideas out of your life. You may also desire a clean cut from old relationships. The thought behind this symbolic image is to free yourself of something that has been holding you back.

You can also decide to get a tattoo of sharpening scissors, which usually stands for better communication with everyone. Since to improve your tools, you need to sharpen them, and for the most part, we are always trying to improve as people.

The meaning behind this tattoo design may be more apparent than that. Maybe you take pleasure in cutting hair, or maybe you are a cook and use this tool to cut mean and herbs. The meaning of the scissors’ tattoo can be very clear, or it can be something a lot deeper.

The previously mentioned meanings are associated with the tattoos of the scissors on their own. However, you are free to get creative with the scissors’ tattoo and combine them with images that might make sense or even have it tattooed in a different style to change the meaning of the tattoo. Below are some ideas of different scissor’s tattoos and the symbolism attached to them.

A pair of scissors is a fashionable tattoo to have inked in an American Traditional style. You are probably asking yourself why this image is often tattooed in the traditional style. This is one of those designs when you need to ask the owner for its meaning. However, the American traditional style became famous thanks to Sailor Jerry, and many of his tattoos are very simple images closely related to sailing the open sea. Besides the fact that the scissors might not have a direct connection with the sea, but it might symbolize cutting ties with what you know as your normal life. This meaning comes from the fact that while at sea, sailors could be gone for months at a time, so it makes a perfect sense that they would like to forget about their ideas of family and home for a little while to get through their work easily.

These tattoos will generally symbolize someone in the profession of hair. Many associates a pair of scissors with cutting hair, so when you see a tattoo design where a pair of scissors is combined with a comb, barbers’ pole, or any salon item, you can assume this person is in the 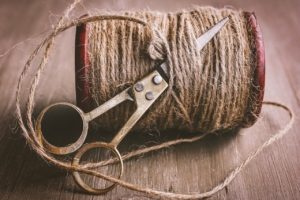 profession of making people stunning by cutting that mop.

The cutting of a ribbon can have a huge deal of symbolism, depending on how the ribbon is designed. When matched with the cancer ribbon, the scissors’ tattoo represents the battle against cancer. Many people are fighting this battle every day, so someone involved in the fight or having experienced losing a loved one might also have this tattoo.

You can also see a design where a ribbon is cut like a grand opening. This tattoo represents a new attitude towards life or a new chapter. Having a grand opening means that the place is open for business, or they are about to break ground, so in a spiritual sense, this tattoo means the same thing.