The script tattoo is one of the most popular tattoos in the world. The beauty of this tattoo design is in its simplicity. It’s also a great style because it is so versatile. Script tattoos vary from person to person. You can choose slogans, quotes, motors, and names if you want. The possibilities are truly endless. In addition to the content, you have to decide on the style of the script you’d like. There are so many to choose from, so you not only do you have to take your time and decide on what you want, you need to find an artist who can do it right.

One thing you should know about script tattoos is that it is fundamentally its art form. Just as some artists are masters for realism and other masters for watercolor tattoos, some artists just have a knack for script tattoos. This means you need to get out there and find the right one. The majority of tattoo artists are talented enough to have a few basic styles of script. On the other hand, the artist can have a tough job accommodating you if you are looking for something a little fancier. If the artist is honest, they will let you know where their skills end when it comes to their script tattoos.

When we talk about scripts, we must state that there are a plethora of styles you can choose from. Below are some different styles of the script that might give you some better ideas on a direction to go.

Formal scripts are largely formed in the 17th and 18th centuries by writers like George Snell, George Bickham, and George Shelley. The script these men designed was produced by a quill or the metal pen nib. Both of these methods can produce think and fine writing. The typefaces that were created from their writing style appeared in the late 18th and early 19th centuries. These kinds of typefaces are used even nowadays in informal situations. For instance, this is obvious in invitations and documents of accomplishment like a diploma. This style of the script has nothing casual in it.

Another kind of script is casual, which very much as the name is less formal. According to some sources, this style was created out of an active hand. No matter whether the width of the strokes is thin or wide, but they all look like they’ve been created by a wet brush rather than a quill. This style of the script first appeared in the early 20th century, and with the beginning of photocomposition, this style was much more present. In the 1970s, this style of the script was used in North America and Europe for advertising.

Another style of script is calligraphy. It is a visual art. The design and implementation of calligraphy are done with a tool that has a broad tip or a brush. According to the definition given by Claude Mediaville about the practice of calligraphy, it represents the art of giving form to signs in a communicative, harmonious, and skillful manner.

Very much like the formal script, calligraphy is used in many formal settings. It is possible to see it on wedding invitations, religious art, announcements, typography and font design, cut stone inscriptions, original hand-lettered logo design, and memorial documents. You’ll also see calligraphy used in film and TV, birth and death certificates, and other formal written works.

After describing the different styles of scripts, we can talk about the different ideas and designs people have used when getting a script tattoo. Much of this is determined by the wishes and important things in the owner’s life. Are they extremely religious? Are they big movie fans? Would you like to look at their body for an inspirational quote once in a while? There are many ways you can use a script tattoo, and below are some of the more popular ways.

We all go through life having difficult times where we’re not sure we are going to survive the day. At times, we just need a few words to encourage us and help us get through that moment. Inspirational quotes are a perfect kind of script tattoo to get for this particular reason. We often see “just breathe” script tattoos. This is a reminder that no matter what is going on in your life, just slow down and takes a breath. It is scientifically proven that deep breathing can bring your heart rate down, so getting this small reminder could be the differentiation between getting stressed out and just having a moment. 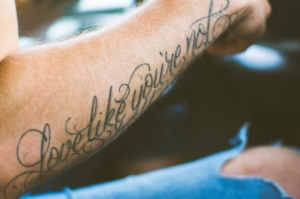 Religious quotes are also used as a script tattoo. Bible verses are also commonly used. These seem to be popular choices when it comes to a script tattoo. For instance, Matthew 19:26 is a verse that fundamentally says, with God, all things are possible. This quote can be inspirational as well, but it gives you an idea of the type of script tattoos people get.

We could keep going on about the many ways people have gotten a script tattoo. The main point is that with all the tattoo shops and artists out there, it could be hard to narrow down who you want to work with. Make sure to ask the artist if they specialize in the script because many artists will say they can do, but they may not understand the intricacies that come with doing script work.