Skulls and crossbones is a symbol used in several tattoo designs, and it is undoubtedly a very popular tattoo design among tattoo lovers. They are also popular under the name of ‘Jolly Roger’ tattoo designs. There are many cultures where this symbol or symbols are linked to death and shortness of life that precedes death. These tattoos are not only adored by men but also by women. The number of meanings attached to the skull and crossbones tattoos is huge. However, the meanings may change in accordance with the skull, which is used to make the tattoo. Going from the fact that it is a universal symbol, it can easily be adapted to mean different things, from political to simply artistic design with aesthetic merit.

In most cases, when it comes to bikers, the skull and crossbones tattoo has a high symbolic value. This tattoo was a statement for others to beware of. There is space for experimentations when it comes to this kind of tattoo design for bikers. For instance, they can be combined with numbers and specific symbols that distinguish the biker’s group or affiliation from the many others.

The most popular variation of these tattoos is the flaming skull crossbones tattoo. This is probably the most common design among men. The skull in the design is very detailed, looking very realistic. For example, the skull may be designed with shades or a bandanna. The crossbones can be placed behind the skull, through the skull, or below the skull in such tattoo designs. The flames and fire combined in the tattoo set the tattoo off, giving it a fierce look that is noticeable by others.

One in the row of a softer version of these exiting tattoo designs and surprisingly popular is the Hello Kitty crossbones tattoo. Once again, this is a smoother and more feminine look of a skull tattoo. Another variation is the candy skull and crossbones tattoo.

The candy skull was created in honor of the celebration know as “Day of the Dead”, which is a Mexican tradition and holiday.

The candy skulls allow creativity in the process, and there a variety of different colors that can be used. This design is another example of the softer side of skull tattoos. With all the different variations, the skull and crossbones tattoo is considered to be very diverse. This is one reason why skull tattoos are very popular, and no one ever regrets getting them.

There are a variety of different meanings and symbolism that are associated with skull and crossbones tattoos. Among them are: 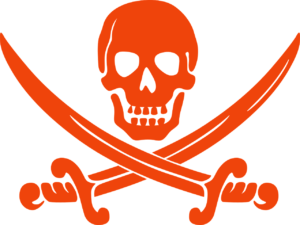