People from Thailand have a specific style of tattoo. Thai tattoos look a bit different than the ones we are used to seeing. Moreover, Thai tattoos own special meaning. This is the reason why people from other countries often come to Thailand to get traditional tattoos. 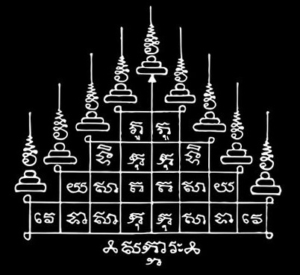 This doesn’t mean that people from Thailand are not aware of tattoo machines. The majority are using them; however, those unique to Thailand are a bit different. Stick and poke tattoos are some of the most popular in Thailand. They still use this style even today.

Tattooing has been a significant part of Thailand’s culture for many years. It is the only society in the world with an annual celebration concerning religion and tattooing. Every year, monks from all over Thailand come to Wat Bang Phra temple outside Bangkok to ink tattoo enthusiasts. These Thai tattoos have a miraculous and religious meaning when you get one. They entail powers of luck, defense, and blessing from above when you have a monk give you a tattoo.

To get a tattoo done in Thailand from a monk and have him bless it is a remarkable thing. Whether you get a new Thai tattoo or have an old one “re-charged” by a monk, the experience is unique.

These tattoos are called Sak Yant. Soldiers from Thailand’s army get these for protection in battle. They believe that these tattoos can stop bullets. The Buddhist designs on the body are powerful on their own. However, adding the prayers and chanting make this tattoo a very influential spell of protection.

They use the stick and poke method. The monk dips the needle in the ink and uses the other hand to direct the needle. He pokes it over and over at a fast pace. The monks that pursue and practice the Sak Yant tattoos can make them at a rate of two or three per second. The final results are a series of dots that blend and form a tattoo that will help guide and defend you.

This Thai tattoo is also known as the five lines of tattoo design. It dates back to the antique kingdom of Lanna, today, Northern Thailand. It is a creation of a Buddhist monk named Kruba Kam of the Wat Ton Pin. This was a Buddhist sanctuary in Chiang Mai, which is sadly not there anymore. This design originates from 1296 and has been one of the main Sak Yant tattoos since.

Each line of this Thai tattoo has its meaning. The first line defends against unjust punishment and helps 50/50 situations go your way. It is a guardian of your home and keeps bad spirits out. The second line protects you from ill fortunes and horoscopes. The third line is a security spell that keeps you safe from curses and black magic. The fourth line empowers your good luck, kismet, and success in your life’s ambitions. Finally, the fifth line is an increase in your attraction and charisma.

This Thai tattoo is also known as Nine Peaks and is very much as a temple in itself. The holiest Buddhist tattoo you can get is the protection and powers connected to this tattoo range far and wide. A lot of people choose this Sak Yant as the first and add other Sak Yants later.

The main design is a depiction of nine peaks of Mount Meru, also known as the mountain of the Gods. According to the Hindu religion, Mount Merus is the home of many of their Deities. The same mountain goes under the name Sumeru in Buddhist mythology.

On the top of each peak, there are three sets of ovals. They represent Buddha and are present in other Yak Sant tattoos as well. Each group of three ovals symbolizes a different Buddha and presents a different spell to help you in life.

The center of the Gao Yord Sak Yant consists of many small boxes. Within each one of these boxes, there is a Khom ellipsis naming a protection spell. This is how the Gao Yord offers the most defense of all the Sak Yants.

Paed Tidt or eight directions is the sacred Geometric Sak Yant with eight mantras. It is written in around two circles in the center of this design. This particular Thai tattoo also incorporates the eight representations of Buddha.

In Thailand, every day, Buddha takes a different pose, and he has two of them on Wednesday. You can find these illustrations in lots of Buddhist temples around Thailand.

No matter where your life is taking you, this tattoo is a symbol of protection. Moreover, it will protect you from evil spirits.

If the Thai culture interests you or is fascinated by their tattoos, you should get one. As you can see, they are full of symbolism and well suitable protectors.