The UFO tattoo also is known as an unidentified flying object is a popular tattoo among science fiction fans and others with an interest in the unknown. There is no person who has never looked up at the sky and wondered what else is out there. The thought that we are the only species in the universe is a foolish one. Especially since science tells us that our universe is merely a grain of sand in the grand scheme of things.

This is the reason why the prospect of seeing UFO’s is so enticing. It would confirm our belief and that there are other things out there than just humans. Additionally to confirming our thoughts, UFOs are really fun to imagine and see in movies. In addition, there is no shortage of UFO sightings. People have been reporting these sightings for as long as can be remembered. From ancient civilizations like the Romans to the Egyptians, UFO sightings have happened all over the world.

You might also know that the UFOs are referred to as flying saucers. This term originates from 1947 when a civilian named Kenneth Arnold was flying his small plane near Mount Rainier in Washington. He insisted that he saw nine objects glowing in blue flying at him in a V formation at about 1700 mph. the fact that this was only 2 years after WWII, 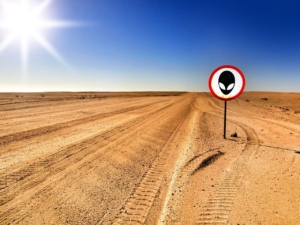 is the reason why he believed them to be new aircraft that were being tested. However, the US military discharged this claim since there was no testing going on the day Kenneth saw his UFOs. He described the motion as if a saucer were being shipped across the water. The media took off with that and now you hear that term even in these times.

We probably all know somebody that claims they have seen something suspicious flying at night. We have also grown up with the thought of aliens coming down and beaming us up into their ship and we can thank sci-fi movies for those thoughts. Some movies that come to mind when talking about aliens and UFOs would include the movie Alien, E.T., Independence Day, Star Wars and Prometheus just to name a few. Taking into consideration how many UFO and alien movies are out there, it’s no surprise that the UFO tattoo is a very popular one.

One thing that makes UFOs so fascinating is that many people believe our government knows much more than they are telling us. We are all familiar with Area 51. This is a facility that is part of Edwards Air Force base in Nevada. For years there have been claims of strange occurrences around Area 51. In fact, nobody even knows the real purpose of Area 51. One thing we do know for certain is it is a highly classified area in the desert where strange things happen.

This has had a profound effect on the curiosity of not only the American people but people all over the world. Children grow up hearing stories about this location which will earn the sci-fi genre some fans. Most people we have talked to with UFO tattoos say they have grown up with the interest in these extra-terrestrial crafts.

One common theme you will see when viewing a UFO tattoo is the image of a spacecraft sending a tractor beam down to the ground pulling someone or something back up to the ship. This has long been a fear (or dream) of people that have an interest in UFOs. There is something about being pulled into an alien ship and poked and prodded that causes deep fears. However, there are people who think these space crafts are here to communicate and make friends. If that is the case then people might be looking forward to the ride.

However, on March 26, 1997, the police discovered 39 dead bodies in San Diego, California. The bodies belonged to people members of the Heaven’s Gate religious group. They believed that in order to reach the extraterrestrial ship that would take them away to a more peaceful place, they had to commit suicide. Needless to say, nobody is sure if they made it to their destination, but we do know that nobody picked up the torch for cult leaders, Marshall Apple white and Bonnie Nettles. The Heaven’s Gate religious group is no more.

Even though we don’t know if UFOs really exist, try telling that to the people that believe and have the UFO tattoo. The people wearing this tattoo know that something else is out there; we just may not have seen it yet.

There is a lot of evidence of strange occurrences that haven’t been explained to this day. Things like crop circles come to mind. A crop circle represents a pattern that is formed in a field of crops. Basically, the crops are flattened to make a pattern that is visual from above. These occurrences haven’t always been explained but there have been cases where people would make crop circles on their own for attention or play a prank.

There will always be people who insist they have spotted a UFO. They are either doing it for attention or truly saw something, but we will never know. However, it’s clear why UFOs are so popular amongst the tattoo community. It is a controversial subject and when you have your own government holding back information; it makes the speculation run wild.

Maybe the UFO tattoo represents a reminder of what is potentially out there. In most cases, you would have to ask the person with the tattoo what it means to them. The one thing we are free to say is that nobody can say for certain if UFOs exist and as long as that is the case, they will always be a popular topic in our civilization.