The alien head tattoo had become an icon of the American pop culture, which originated in the 1950s throughout the time of the Area 51 incident. This is better known as the alleged site of a UFO crash, which was disclaimed by the U.S. Air Force as a weather balloon.

Alien tattoos can be incorporated into a variety of different areas. They can be designed to look realistic, some of them very realistic and detailed. Such types of alien tattoos may appear evil and vengeful. The alien tattoos can usually be designed happily, maybe smoking or drinking a cold beer. They can also be stunning, revealing an entire fullback alien tattoo, which can include spaceships, planets, stars, as well as some otherworldly symbols. 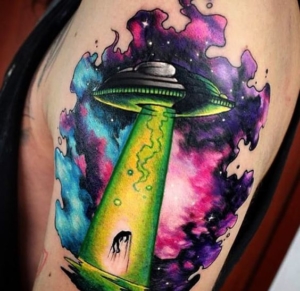 The head of the alien head tattoo is shaped roughly like an inverted teardrop, having two large, black, oval eyes. It has also come to stand for the existence of UFOs, as we already mentioned, as well as aliens and extraterrestrial life. In tattoo art, for instance, the alien head is sometimes also accompanied by the full-body depictions of the alien, as well as the entire otherworldly scenes too.

Also, alien head tattoos may represent someone that has an appreciation for science and research of these creatures. A lot of people in North America have heard about the incident which happened at Roswell. This was a single event that sparkled imagination, as well as popularity for aliens. After this event, they were elsewhere, such as in magazines, books, television shows, and movies. Even after all that time, they are still very popular today.