Twining and swirling vine is very popular imagery. This imagery serves as a symbol of a whimsical relationship with nature and the natural world’s mystery. The vine can be used either decoratively, accompanying other imagery, or on its own. Another description used in combination is generally elfish, involving sprites or fairies, or other forest creatures. The long, stretching ropes of leaves and flowers are often used to cover limbs, down the back, or along the side of the body, enhancing the vine’s natural structure. 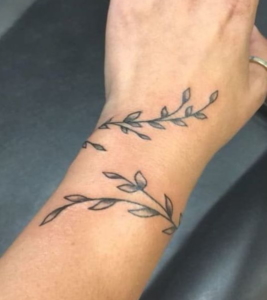 The vine tattoo also symbolizes the ability to survive since the vine can grow anywhere. To climb to areas of more sunlight, the vine uses other objects. No matter what, the vine will find a way to get to where it needs to be. They refuse to die. The tattoo of a vine says a lot about a person. People who own the vine tattoo might have suffered some trauma in their lives and survived to thrive and be better people. This comes from the fact that the tougher the environment, the stronger the vine gets. Not only is the vine or person able to grow in harsh environments, but they can also end up growing beautiful flowers that exhibit what was hiding all along.

Vines are also a symbol of higher learning. People with the vine tattoo are avid learners with open hearts, always looking for deeper meaning in life. In some cases, the vine struggles to find sunlight. This represents the struggle of life. The individuals who have endured hard times make it even sweeter when they find the sunlight. They fought and survived the tough times making, which makes them a better version of themselves, and by doing so, they know there is still room for growth, always seeking a higher level of learning or divinity.

A person with a vine tattoo is someone you want on in your life. They are considered a loyal friend and will stick by your side even if they know you are wrong. Although it might not be the “right” thing to do, they are all in. The vine tattoo can also symbolize some other characteristics that are not easily seen. The hidden symbolism is important, as well. Vine’s wrapping and winding nature provide a unique symbolism for the vine tattoo. It is a perfect symbol for strength, progress, partnership, endurance, promise, survival, and friendship. Christian believers consider the vine as a sacred symbol. Those vines that bear fruit represent bounty and big harvests. Grapes growing from a vine symbolize hard work, fruits of labor, vision, and determination. Vines were considered a symbol of the life of ancient Sumerians.

Some traditional vine tattoos include forest-like imagery of leaves and flowers, hearts, stars, or other shapes. The linework of these tattoos is generally more feminine. It is a perfect representation of a delicate or girly personal style rather than a fairy-like appearance. The vine imagery can also serve as a decoration for another shape. For instance, a heart, to add the natural forest motif to a traditionally feminine image.

Vine can be represented realistically, with full, detailed leaves to create a less feminine design. Another forest iconography, such as tree branches or even mushrooms, can sometimes be added to enhance the theme of wood and nature.

Words and phrases can also be part of a vine tattoo. Curling with the curving lines of the plant figure, they help to create an outstanding text. This is due to its similar swirling style, and a handwritten script is often used, blending in perfectly with the form of the vine. Smaller vine designs can be inked on fingers, toes, or anywhere else to create a daintier image.

Vines are usually rendered with a flourish of leaves along with their figure, as well as flowers, small bulbs, or large roses. All kinds of floral imagery work well with the vine because they emphasize a connection to the woods. Birds and butterflies are often part of the designs as well, creating a larger piece. This piece has a more visual appeal added to the woodsy theme. The leaves and other adornments are usually designed minutely to create a sense of delicacy to the image, although any size will work well to complement the vine.