Insects are remarkable creatures, and they deserve our appreciation, as they are an integral part of the environmental system. Insects play a crucial role in the ecological balance on Earth. They are very helpful for the formation of the top layers of the soil, pollinate blossoms and serve as plant pest controllers. They are also considered to be a crucial element in the food chain, being food for reptiles and other animals. Because of that, insects are often used as a tattoo design. One of these important (with strong symbolism) insect is, of course, the wasp.

The wasp represents a flying and stinging type of insect, the most recognizable of which might be the yellow jacket, although the hornet is also well known. Because some species can be communal, with their activities centered on a queen, they are at times associated with the notion of community and occasionally, by extension, with female energy. While they seem rare or unheard of, wasp tattoos have become more popular over the last few years. Wasps play a vital role in all our lives. As tattoo designs, they can be represented alone; however, in most of the cases, they are portrayed in a group. The design can be done in a cartoon form, or they may look more realistic.

The image of the wasp in history:

Earlier, there was no difference between wasps and bees since they were equally worshiped. They can be found in many religions, such as Christianity and Hinduism. In all religions, bees and wasps were identified with women, and are used to symbolize matriarchy. The reason for that is the beehive pattern of order, system. Honey has always been associated with the divine drink. It is believed that the bees are sent by God to take care of people’s health. Bees symbolize hard work, diligence, communication, ability to make love to clean. 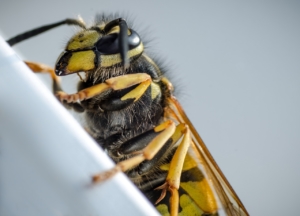 However, wasps are substantially different from the bees, which should be considered if you wish to make a tattoo wasp. These insects have a smooth and elongated appearance. They are aggressive, and although in most of the cases they attack for self-defense, that is not always the case. When they attack, they use the sting and the jaw apparatus, attacking repeatedly. Wasps do not produce any mineral product and also are considered to be the natures cleaning service. They eat not only pollen but also eat other insects, and by that, they are cleaning the environment and saving the harvest.

Wasp tattoos are not super common. Many tattoo artists are probably are not that fascinated by such a design. However, it can represent a variety of meanings that may apply to your life.

To understand the symbolism behind the wasp, we have to take a detailed look into their world.

Based on the behavior of insects, wasp tattoo carries a value that is suitable for people with the following traits:

– The independence of the society and other people’s opinions.

– The reluctance to start a family and take care of it.

– The wish to rid the world of evil, dislike of parasitism.

– The sensitivity, good intuition, the ability to understand people.

– It may be used as talisman or amulet, or another kind of protection.

– Ability to deal with problems alone.

The wasps as a tattoo make an excellent design. It is bright and lively, suitable for all areas of the body, and can be an excellent choice for both men and women who are interested in having an insect tattoo.

Tattoo of a wasp can be used both individually and in the composition. In addition to bright colors, the black and white versions with a lot of details represent a unique design that looks very stylish.