Apple, as a symbol of good and evil, is shown through fertility, love, sensuality, temptation, and sin. For a long time, the most famous one belonged to Eve. In Western culture, apples have long been associated with something desirable and yet forbidden.

In fact, at that time it was an unnamed fruit from the Tree of Knowledge of Good and Evil in the Garden of Eden, which Eve offered to Adam, and was later named “apple” by Renaissance artists that were inspired by the Greek legend, where the ripe apple represented Princess Diana. Also, it is a source of immortality when Hercules retrieves from Hesperides; and it is even used by Solomon as the image of the sweetness of the word of God. 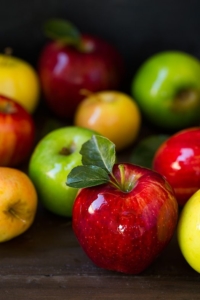 For example, in China, the words for “apple” and “peace” sound alike. Even the shape of the fruit, with its near-spherical symmetry, has also been used as a sign for the world rule of emperors and kings as they hold an “imperial apple” along with their scepter.

For the Celts, the apple is considered as the fruit of knowledge, but also of magic and prophecy. In the legends of Celtic Britain, Avalon (Appleland) is a symbol of divine joy. Indeed, nearly every Neolithic or Bronze Age paradise of which we know was made of orchards that contained apples.

This is a type of tattoo that both men and women can get. Such tattoos do hold symbolic value to those that wear them. As we already mentioned, it is a symbol of good, as well as evil. When in a tattoo, this motif can represent those same qualities. But, you need to remember that your apple tattoo represents what you want it to and nothing else.