We are all familiar with the story of Adam and Eve, the first man and woman on earth. The base of this story of their creation is a myth by the Abraham religions. Their significance in regular life is that they are central to the belief of originating from a single-family. Even the most important event in Christianity follows the creation of Adam and Eve. That is obviously the fall of the man by committing the original sin. They are important in Christianity but not in other religions such as Judaism or Islam. 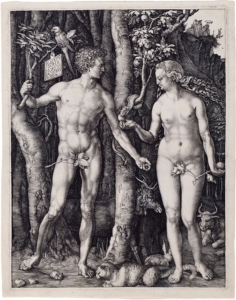 According to some traditional texts, God or Yahweh is the creator of the first being, Adam. At that time, the earth was still null and void. Adam was a creation of earth’s dust and breathing “into his nostrils the breath of life.” He was permitted to enter the Garden of Eden to live in and tend to. However, he receives orders with a penalty of death of the eats the forbidden fruit. That is the fruit from the “tree of knowledge of good and evil.”

Not to be alone, God created other animals and birds. However, since it wasn’t enough, he created another being from his own ribcage called Eve. The two were the essence of innocence until Eve gave in to the temptation of the evil serpent. Adam followed her steps and also ate the forbidden fruit.

After that, they both recognized their nakedness and covered themselves with fig leaves. Sooner enough, God proclaimed their individual punishments. Eve’s punishment was pain during childbirth and subordination to man. Adam’s punishment was stooping down to an ill-fated spot with which he must sweat and toil for his nourishment.

In honor of Christianity and to remember the original sins, people decide to get the Adam and Eve tattoo. This tattoo can be a reminder to live a more honorable life. You can also get it for purely aesthetic purposes. Another reason for getting an Adam and Eve is to remember the essence of brotherhood.

Due to how famous their story is, there are so many versions of the Adam and Eve tattoo. These tattoo designs below are only some of the most popular representations of Adam and Eve.

This tattoo is the most popular inspiration from the story of Adam and Eve. It looks amazing because it is very colorful. Usually, it’s on the arms and shows the holding of the forbidden fruit with a serpent coiled around the arms. This tattoo is one of the perfect representations of the fall of Adam and Eve from heaven.

This kind of tattoo includes the portrait of the beautiful Eve. The eyes are quite sharp, which shows the temptation. You can see a snake coming out of the bitten part of the forbidden fruit. To impose the idea of the fall from grace, you can surround her with many other fruits.

If you want your own Adam and Eve tattoo design, you can get a serpent and the forbidden fruit. This is a very iconic image and an important aspect of their lives and that of humanity. The snake can spring out from a bunch of beautifully made flowers in the tattoo. Such tattoo designs are perfect for the back.

This tattoo design includes a snake that looks pretty vicious, and the colors fit that representation. The teeth of the serpent are right on the forbidden fruit. The dilemma in choosing the beautiful and bright colored forbidden fruit is pretty obvious but with a price.

In this tattoo, there is a mix of beautiful colors with the shading effect, giving it a 3D and hyper-realistic effect. This design looks great on the side of the stomach, starting from the chest to your waist. However, you can get a full-back Adam and eve tattoo in this style.

In this version, Eve looks like an evil temptress with the literally evil-looking apple in her hands. The snake is ready to make a move. For modern people, the temptation can be anything. For instance, the owner can ink the word ‘ecstasy,’ so that means drugs are a temptation for him.

This is a simple design of the forbidden fruit and the snake that looks amazing. The outline of the design is enough for an awesome tattoo design. You can ink this Adam and Eve tattoo on the legs.

The apple in this design is different and looks nothing like those in other designs. It is so different because it’s the evilest apple ever that made Eve fall for the temptation. The use of the golden color is pretty appropriate in this case. This design also incorporates a black-colored snake, coming from right inside it. It’s black because it is a symbol of evil.

As previously said, these are only some of the most popular versions of this tattoo. They all revolve around the legendary story of Adam and Eve and their fall because of temptation.