Archangel as a chief angel tattoo has deep and profound meanings. There is a huge variety of archangel designs, as well as meanings to draw on and it often has deep emotional meaning for the wearer. And let’s be honest angels make wonderful tattoos.

There are a few designs that can match the beauty and meaning of angel tattoos. They often carry a deep, as well as symbolic meaning for those that wear them. They can be worn for a variety of reasons and serve a lot of different purposes. Angels are well-known all over the world, and they are part of Christian, Islamic, Jewish, as well as some other religious belief systems. 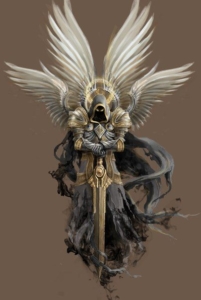 The word “archangel” itself is usually related to the Abrahamic religions, but entities that are very similar to them are found in a number of religious scripts. The archangel is one of the many categories of angels in Christian religions. The English word is derived from the Greek ἀρχάγγελος (arch + angel, which literally means chief angel or angel of origin). They are chief angels and even princes who hold a seat of power in the Angelic Choir. In both the Old, as well as New Testaments, there are seven archangels: Uriel, Raphael, Raguel, Michael, Sariel, Gabriel, and Remiel. Frequently in artwork, the archangels are represented as emitting holy power, wearing more elaborate clothing than ordinary angels, and sometimes performing their specific roles.

There are a variety of meanings connected with angel tattoos. Most of them depend on what kind of angle is being tattooed. Some of the ideas are spirituality, hope, guardian, innocence, love, loyalty and so on.

Angels can also change meaning depending on the wearer. For instance, on women they are thought to represent purity and calmness and on men, they describe the higher self. There are a many different ways to portray your angel in a tattoo. The options are endless, which is another reason it is so popular.