What is Beowulf? Beowulf is one of the greatest achievements in English Literature and the earliest European vernacular epic. Beowulf is a heroic poem, which deals with the events of the early 6th century. According to records, it was composed between 700 and 750. At first, the poem was without a title. However, later on, this poem was known as Beowulf after the Scandinavian hero with the same name. His exploits and character provide its connecting theme. Besides the fact that there is no evidence of a historical Beowulf, some characters, sites, and events in the poem are historically authentic. Until 1815, the poem did not appear in print. It’s a single manuscript that dates to circa 1000 and is known as the Beowulf manuscript.

There are two parts where Beowulf takes place. The opening is in Denmark, where King Hrothgar’s magnificent mead hall, Heorot, has been ravaged for more than a decade by nightly visits from an evil monster, Grendel. Grendel carries off Hrothgar’s warriors and devours them. Suddenly, young Beowulf, a prince of the Geats of southern Sweden, arrives with a small group of retainers and offers to purify Heorot of its monster. Hrothgar is overwhelmed at the little-known hero’s daring but welcomes him. After an evening of celebrating, much courteousness, and some impoliteness, the king retires, leaving Beowulf in charge. In the night time, Grendel comes from the moors. He tears open the heavy doors and manages to devour one of the sleeping Geats. Then he grapples with Beowulf, whose firm grasp he cannot escape. He sets himself free, tearing off his arm, and leaves with lethal wounds. 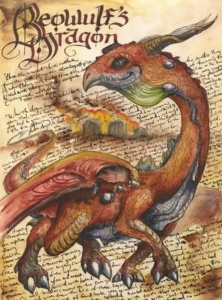 The next day is one of triumph in Heorot. However, as the warriors sleep, Grendel’s mother comes to take revenge for her son during the night. She kills one of Hrothgar’s men. Beowulf finds her in her cave at the bottom of a mere and kills her in the morning. He cuts the head from Grendel’s corpse as proof and returns to Heorot. The Danes celebrate once more. Hrothgar makes a departure speech about the true hero’s character, as Beowulf, enrich with honors and generous gifts. He returns home to King Hygelac of the Geats.

The second part quickly passes over King Hygelac’s subsequent death in a battle (of historical record), his son’s death, and Beowulf’s succession to the kingship and his peaceful rule of 50 years. However, at that time, a fire-breathing dragon ruins his land, and the tough but aging Beowulf engages it. The fight is long and awful and a sore contrast to the battles of his youth. Excruciating, too, is the abandonment of his retainers except for his young kinsman Wiglaf. Beowulf kills the dragon but with fatal wounds. The poem concludes with his funeral rites and mourns.

Heorot is a symbol of the achievements of the Scyldings, specifically Hrothgar, and their level of civilization. The hall is a residence for the warriors who sleep there and functions as a seat of rule. It is a place of light, warmness, and delight. This home is far more distinct than Grendel’s gloomy swamp as well as the dim and cold of winters in Scandinavia. In Heorot, Hrothgar celebrates his triumphs and rewards his thanes (warriors) with various treasures. Its towers are so high that they compare them with a cliff. Its gables have the shape of horns of the heart.

People from the nearest tribes also contributed to the rich decoration and complex designs. The hall also represents the setting of Beowulf’s first great battle, the defeat of Grendel. When Grendel invades the hall, he is aware that he hits the very heart of the Scyldings. That lends extraordinary meaning to his victories and Beowulf’s eventual freedom of the hall from the ravages of the ogres.

The cave where Grendel and his mother conceal from the world is representative of their lives as outcasts. Hidden beneath a deceitful mere in the center of a murky, sinister swamp, the cave allows them a security and solitude level in a world that they view as hostile. They indeed are not welcome at Heorot, and they are aware of it.

The cave is also a symbol of their legacy. Cain’s offspring represent sorcery, black magic, demons, ancient runes, and hell itself. When Grendel’s mother can fight Beowulf in the cave, she has a different advantage; his victory is all the more important. It is not evident whether he wins because of his skill, the power of magic (the enormous sword), or God’s interference. The cave on its own is a symbol of a world that is not familiar to the people in Heorot. The first is tall and vivid and full of song and delight, and one of the Scyldings’ most remarkable accomplishments. The other world is dim and humid and full of wickedness, beneath a mere in the center of a fen and the symbolic home of bitter outcasts.

The initial Beowulf aimed to return with the entire body of Grendel to present to King Hrothgar. However, he could only return with the right arm or claw from when the fatally wounded opponent flees to the swamp. The claw is hung high under Heorot’s roof (most likely on the outside beneath the gables) as a representation of Beowulf’s triumph.

For Grendel’s mother, it is a symbol, representing her defeat and humankind’s macabre sense of what might be a suitable trophy. Full of sorrow and anger, she retrieves the arm from Heorot and kills another Scylding in the process. When Beowulf finds her to the mere and ends up in her underwater cave, he no longer wants the claw. Grendel’s head that he finds after an odd, perhaps holy brilliance illuminates the dimly lighted cave is much more striking. He ignores the enormous wealth in the cave, instead choosing to carry the splendid, gigantic head as symbolic of his triumph over both ogres.

The dragon’s treasure-trove sadly represents the narcissism of human wishes as well as the variability of time. Just as the dead warriors cannot use the wealth, neither can the dragon. He devotes his life to protect a wealth that he frankly has no use for. Beowulf gives his life defeating the dragon and gaining this impressive treasure for his people, but they won’t profit from it either. This is because they bury the treasure with him.

All of these symbols and all the characters from Beowulf can be part of tattoo designs. Beowulf’s tattoos are striking and powerful, just as the poem itself.