Home
Tattoo Meanings
The Celtic Dragon, In Tattoo Designs, Being A Symbol Of Courage And Power

The dragon is one important motif in Celtic mythology. Dragons were usually portrayed side by side with the Celtic gods. Being creatures that protect the Earth, as well as all living things on it, a Celtic dragon is considered as the most powerful of all the Celtic symbols. They are usually used as a symbol of power, as well as wisdom among leaders.

The Celtic dragon represents the often-paired features of both sovereignty and power. It was emblazoned on the helmet of King Arthur, and nowadays, the red dragon is still an official emblem of Wales. 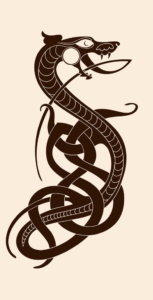 In all the examples, the western dragon exemplifies elemental power, particularly of the Earth, as they typically dwell in dark caves, guarding their treasure hoards. The dragon, just like the serpent which it resembles, was also connected with the devil and the sin. When Christian hero knights in shining armor, like St. George and St. Michael slew dragons after long and dangerous battles, it was believed that they were slaving evil.

The Celtic of the western dragon is often shown with bat-like wings and breathing fire. In tattoo art, dragons take the same characteristics and are representative of mythical power, as well as mystery.

The unmatched intricacy of the Celtic dragon tattoo also had some deep connections to the Celtic folklore and symbolic meaning. These fierce beasts are a masculine addition to the relationship of body art. As it resembles the serpent, it is usually associated with evil and fire.

Dragon tattoos also incorporate a certain sense of fearlessness into the style. So, the Celtic dragon is usually meant to symbolize courage and great power, despite some of the negative connotations which we mentioned above. Nowadays, a lot of people proudly show off the tattoo only as an homage to their ancestry and heritage.

In Celtic society, these demonic appearing dragons were once thought to have the ability to predict the future and have some magical healing powers too.