The spectacular and sometimes nearly full-coverage tattoo which is known as “the bodysuit”, originated sometime around the 1700s. This is a reaction of some strict laws concerning conspicuous displays of wealth.  As only the nobility was permitted to wear fine clothing, those that were middle class and wanted to adorn themselves, sometimes chose a tattoo. 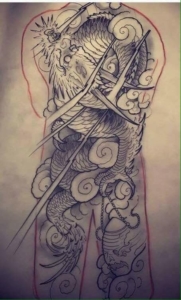 The idea of the full-body tattoo may come from the samurai warriors’ sleeveless campaign coats, which have typically displayed some heroic designs on the back, as well as symbols of courage and pride, or maybe a guardian deity or dragon as well. Similarly to this, tattoo designs started on the back and gradually moved to the shoulders, arms, thighs, and eventually the whole body. Tattooing over the entire front upper part of the torso, except a vertical strip that is running from the chest to the abdomen, gave the effect of an unbuttoned jacket. Though, the development of the bodysuit also coincided with the popularity of fictional tattooed heroes.

Somewhere at the end of the 18th century, and the start of the 19th, an illustrated work of fiction imported from China, created both unprecedented inspiration, as well as a desire for a tattoo. The Suikoden, which is translated as The Water Margin, was actually a Robin Hood type of tale which recounted the exploits of 108 heroes, many of whom had tattoos.

Also, in several other parts of the world, traditional tattooing is still present. For example, we can mention Nepal, North Africa, India, and Jerusalem, and in these places, traditional tattooing was observed and recorded as well. In Nepal, the gods, as well as goddesses of Hinduism are a theme that is ever-present, as also are the birds and flowers. In the Gujarat area of northwestern India, tattoos are generally some combinations of dots and symbols that form patterns that are designed to ensure fertility, ward off the evil eye, as well as offer all manner of protections. In Jerusalem, the tradition of pilgrimage tattoos for visitors of the Holy City was already in place.