Martin Hildebrandt is the man who is recognized as the true tattoo pioneer in the US, also known as the first tattoo artist in New York after the Civil War. This man is also known as the first tattooist who has opened a dedicated tattoo shop in the US.
The fact that there are many lost artifacts and forgotten stories about the people who were considered as the pioneers of the early tattoo art, it appears that the general data about them is fundamentally unknown to the modern world. This is the reason why very early tattoo history can be almost hard to learn. The same happened with the date concerned about the life of Martin Hildebrandt. Nowadays, there is little to no evidence of the existence of Martin’s artistry. There is nearly no certain information about many aspects that should matter. What is most important, there are also no portfolio samples or tattoo flash of Martin Hildebrandt’s creations. 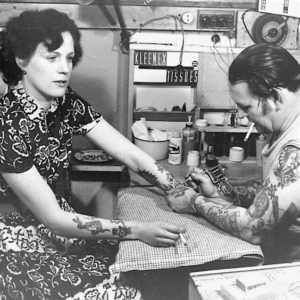 Hildebrandt himself was covered in tattoos before he started tattooing himself in 1846. During that time, he was a sailor aboard the frigate United States. One of the first found records that prove Hildebrandt was a tattoo artist in New York City dates from as far back as 1859. During the Civil War, Hildebrandt served with the Army of the Potomac.

Martin talked about his experiences during the war, saying that that was the most difficult period of his life. In a time of war, he used to mark thousands of sailors and soldiers, by putting their names on their arms or breasts. The majority of them have identified thanks to these marks after they died or were wounded.

Nora Hildebrandt – also known as the “Tattooed Lady.” or the first lady to be tattooed

1882 is the year when a woman, who was tattooed by Hildebrandt, was exhibited in Bunnell’s dime museum on the Bowery. This woman is recognized as the first lady ever, who wore tattoos in America. Her name was Nora Hildebrandt.

Nora Hildebrandt is the lady popularly known as America’s very first professionally tattooed lady. Her whole body was probably covered with more than 365 separate tattoos. Her life story is probably made up for a modern perspective, suggested that she got all of her tattoos after Sitting Bull, and his tribe captured her. This tribe tied her to a tree and gave her a tattoo for each day for an entire year.

There were many speculations from people who claimed that she was either sister or daughter of Martin. However, there isn’t any proof that there was a family connection between her and Martin Hildebrandt. Nora was originally from England, and neither had a marriage with nor was a relative of Martin. In reality, he has also tattooed a handful of other “inked ladies.” Nearly all of them worked as models in sideshows and dime museums in New York and around the world.

Jacob Hildebrandt is a person whose identity is also raising some questions. Amelia Klem Osterud, who is known as the author of “The Tattooed Lady: A History” in her writings, claims that Jacob Hildebrandt appears as Nora Hildebrandt’s brother in a NY Clipper ad. However, Osterud managed to find a listing for a marriage between Nora Hildebrandt and a certain Jacob Gunther from the year 1889.

The lost history of tattoo art

As previously mentioned, some of the most intriguing and relevant artist figures in early American tattoo history yet are fundamentally unknown to us today. Nevertheless, there are a few researchers that have managed to provide and confirm various details about the life and art of Hildebrandt. For instance, Daredevil Tattoo’s own Michelle Myles did broad research on the life and work of Martin Hildebrandt. She discovered that there was only a little information about Hildebrandt available online. Most important, much of it appears to be either conflicting or, most of all, flat-out incorrect.

With everything being said, it is obvious that there are many principally significant details about the tattoo art that are hard to verify. This is because the majority of them are lost in the fog of the spotty and unreliable practices of keeping records during the past time. This is the reason why tattoo enthusiasts can find only a little information about Martin Hildebrandt, the man known as the pioneer in tattooing and his tattoo art.