Do you think that tattoos are an art form? You should thank Maud Wagner for that. But who is she? Maud Stevens Wagner, who was born in Lyon County, Kansas in 1877 to David Van Buran Stevens and Sarah Jane McGee, was an aerialist and contortionist, working with numerous traveling circuses. She is also considered the lady that is responsible for breaking the myths surrounding tattooed women in America, as well as for being the first female tattoo artist there.

At the start of the 20th century, there were a lot of traveling circuses wowing viewers from coast to coast. From highly trained animals to elaborate trapeze acts, there was no shortage of entertainment for a crowd to catch. But, for many show-goers, it was the sideshow performances that kept them coming back for more. One such sideshow performer was the woman named Maud Wagner, who would go on to become the first registered female tattoo artist in U.S. history.

Most women that were living during the Victorian period were rather humble, always decently dressed, and thought that tattoos were a man’s thing. However, this woman proved to everyone that a woman could wear tattoos and look as beautiful as possible, and maybe most importantly, need to be judged as immoral because of it.

Maud was an interesting person, not just because of her tattooed body, but also because of her profession. Even though she lived during the Victorian period, that didn’t stop her from expressing her passion for tattoos, as well as living her life the way she wanted to. 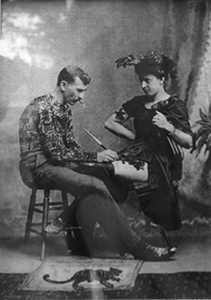 While traveling with circuses and sideshows, Maud met Gus Wagner, who was a tattoo artist that represented himself as “the most artistically marked-up man in America” and was otherwise known as “The Tattooed Globetrotter.” He was also one of the last tattooists to only work by hand, using the stick and poke method. She met him at the Louisiana Purchase Exposition in 1904, where she was working as an aerialist. Gus always told he learned how to tattoo from the tribesmen in Java and Borneo. Attached by tattoos, Maud exchanged a romantic date with him for a lesson in tattooing. After a few years of dating, the tattooed couple got married. Together they had a daughter named Lotteva, who started tattooing when she was only nine years old and went on to become a tattoo artist herself. Despite the profession of her parents, Maud forbid Gus to tattoo her, so she never got inked by anyone else, becoming one of the few un-tattooed tattoo artists known.

As an apprentice of her husband, Maud learned how to give traditional “hand-pocked” tattoos – despite the invention of the tattoo machine – so, she became a tattooist itself. Together, the family was the two of the last tattoo artists to work by hand, without the aid of modern tattoo machines.

In addition to the inking lessons, Gus Wagner also decorated her body with his works of art — so frequently that before long, she was covered up to her neck in blackwork designs, which only added to the spectacle created by her sideshow performances. It was not much time needed to become covered in tattoo artwork, becoming a circus attraction herself – an inked woman. The tattoos of Maud’s body had different meanings. Margo DeMello, in her book titled “Inked: Tattoos and Body Art Around the Word,” comments that the tattoos of Maud were ‘typical of the period’ and they consisted of ‘patriotic tattoos’ and ‘tattoos of monkey, as well as butterflies, lions, horses, snakes, trees, women.’

She also had her name tattooed on her left arm. Tattooed women were a frequent occurrence in circus sideshows; it was somewhat of a spectacle to see a barely-clad woman with her body permanently altered through ink.

When not attracting crowds of her own, she became tattooing her circus coworkers, eventually picking up public clients, always opt to stay true to her hand-poked roots, despite the fact that other artists widely used electric tattoo machines in the industry.

After she left the circus, Maud, together with her husband, traveled around the United States, working both as tattoo artists and “tattooed attractions” in vaudeville houses, as well as country fairs and amusement arcades. They are attributed with bringing tattoo artistry inland, away from the coastal cities and towns where the practice had started.

Between them, with Gus being the most artistically marked-up man and Maud being the first female tattoo artist in America, ruled the tattoo industry and spread the tattoo trend far from the places where the practice was started.

Maud Wagner passed away on the 30th of January, 1961, at the age of 84. She has been remembered as a remarkable lady who dared to teach women that tattoos are not meant only for men. She is also known as the only female tattoo artist to achieve this renown, even though she certainly didn’t invent the practice of tattooing women – nor did she claim to. She did one of the most famous stick and poke tattoo artists of her generation. This legacy lived on through her daughter Lovetta whose last tattoo was completed using the stick and pokes on tattooist and collector Don Ed Hardy.