Home
Blog
Tattoo Swelling: Is It Normal, Why It Appears And What It Means?

After you get a new tattoo, the area surrounding the new ink will go through numerous changes as it starts healing itself after the damage caused by the needles during the process of tattooing. Tattoo swelling is one of the most common side-effects which may happen as the wound and the area around it start healing. A swollen tattoo may cause worry amongst unsuspecting people that do not know that this may occur to their new ink. 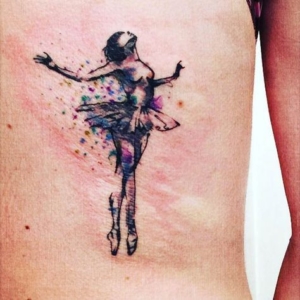 Your beautiful and fantastic tattoo now hurts to buggery, is all red, bruised, as well as swollen. It continuously aches, and every time you move it, you wince. If you ask yourself if this and everything else is normal, the answer is yes.

Even though swelling does not happen on every new tattoo, it is not exactly uncommon, and it probably occurs to almost all new tattoos of average size.

While you were getting your tattoo, a needle was rapidly piercing your skin, passing through a few of the layers of the skin in order to deposit ink below the epidermis. The truth is that your body sees your new tattoo as a wound that has to be healed, and it is a part of the healing process, as well as bruising, which is medically known as a contusion. However, in almost all of the cases, a swollen tattoo is nothing that should worry you.

Most of the time, the swelling is going to be a natural process that your body sets up to help to heal around your wound. The process is also very unlikely going to affect the final appearance of your tattoo in any way.

As we already mentioned, the swelling around the new tattoos often happens because of the trauma which is caused to the skin as the tattooing needles continuously penetrate the same area of skin a lot of times in one minute during the process of tattooing.

Keep in mind that to your immunity, your fresh and new tattoo is simply considered an injury. When your body is injured, a blood clot forms around the broken blood vessels, creating a bruise at the impact site.

The swelling is also an automatic healing response by the body as it sends more fluid, as well as white blood cells to the area in order to fight any bacterial or viral antibodies that may try to enter the opening in the skin.

The fluid will cause the area to swell and tighten too, which will restrict movement to make sure that the area cannot twist and turn too much, which could also cause even more considerable damage. Essentially, the swelling is there to help you.

The white blood cells are also sent to the wound to start healing it from the outside-in, and such cells may usually elicit an inflammatory response.

Tattoo swelling may come in different forms, from just a very small lump underneath the tattoo to some large red areas of building lumps around the tattoo.

Here are the most common causes of tattoo swelling and bruising:

Specific parts of the body are more prone to swelling – particularly any area which is below the waist. So, swelling is more common in the flesher parts of the body or also at places where there is a lot of blood flow close to the skin. Areas such as the ankles and the feet are going to get more swollen and bruised than some other areas.

The fluids that cause the swelling have less of a chance to spread upwards and also away from the site of the swelling.

Long sessions, as well as heavy-handed, rough tattooing, is naturally going to result in increased swelling and bruising to the area. To prevent that, you have to choose an experienced tattoo artist that has already developed techniques over time to minimize the damage to the skin.

Taking any kind of blood-thinning medication before you get a tattoo may cause heavier bleeding throughout your tattooing session and for a while afterward, too.

Blood thinners like alcohol, coffee, as well as aspirin or some blood-thinning medications are not supposed to be consumed before, during, or also after getting a tattoo, as they may cause excessive swelling as the tattoo heals.

Even though rare, tattoo swelling may uncommonly be a symptom of an infection.

When an infection is the cause of the swelling, the swelling is normally going to be partnered with either a rash, extreme redness or skin which is painful to the touch and also very sore with no obvious signs of improvement for a few days.

To avoid infection, as well as excessive swelling, it will be quite important to look after your new tattoo. Your artist will explain the procedure of proper aftercare, and everything will be quite good. If there’s anything that you don’t understand, please don’t hesitate to contact your tattoo artist. Feel free to ask for some advice and guidance because his/her experience with these situations can only be helpful. You need to understand that every aftercare process is a different story. No matter how easy or difficult this process was for somebody, you know it doesn’t matter that it’s gonna be the same with you.

Skin healing is a process that sometimes needs some time. You need to be persistent and patient, and the result will reveal itself in a couple of weeks. Some touch-ups are a normal thing because the skin is living and breathing canvas. It’s quite important not to rush into that session because it can easily lead to some scarring.

So, in the end, you need to think before you ink and choose your tattoo artist wisely.