Tattooing is an art which became more and more famous over the last couple of years. Although the techniques which are utilized today are not the same as the ones which were utilized before, there is a woman that stayed true to an original form of tattooing, which dates back a thousand years. Her name is Whang-Od, and there are thousands of people that travel to the Philippines to meet her and have their chance to be tattooed by her.

The artist named Whang-Od is the 101-year-old tattoo artist that lives in one small village in the Philippines, which is called Buscalan. At that place, she is known as a legendary ‘mambabatok’ or a hand-tap tattoo artist. 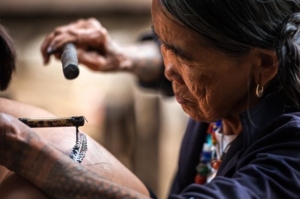 With the use of thorns and a coffee tree branch, the tattooist makes beautiful artwork on the lucky people that she decides to tattoo. She is the last of that kind, and now she teaches her grand-niece how to tattoo so that the tradition can be continued.

To apply a tattoo, you will first have to get coal, and then thorns, and also wipes. The hammer which she uses is from a coffee tree. The thorn she uses is from calamansi or pomelo fruit trees, explained Whang-Od in one video for the Great Big Story.

In that same video, she also talks about how nowadays tattooing becomes more and more common. However, back in her days, the only people in her village who were allowed to get tattoos were men who had killed a person.

Moreover, she revealed that her father was a mambabatok who was the one that taught her how to tattoo. She said that she doesn’t want the tradition to disappear. This traditional tattooing is going to last forever, according to her.

In 2017, Whang-Od appeared at a tattoo convention where she tattooed about hundreds of people. Her appearance caused a backlash after people accused the trade show, which took place in Manila, of exploiting her.

Some people even wrote on Twitter that she is 100, and she is still a national treasure, and they also mentioned her sending to Manila to tattoo 200 people just for profit, saying that is sick, as well as inhumane.

One photo of her sleeping during one panel at the convention also went viral, and that caused even more uproar. But, the organizers of the even were insistent that she was not being exploited and that there was a dedicated medical team that stood by when she needed some help or anything else.

This was her first time in Manila. There were a lot of people that were excited to see her and to also get some tattoos from her, and she was happy because of that. But, some said that she was exploited and that the organizers did not take the proper care for her to make sure that she was in good health.

Guzman spent the day taking some photos of the event and Whang-Od herself too. At that time, he says that he observed her and said that she looked like being in good spirits and condition too.

He explained that he saw her and he could not say that she looked tired. The problem he felt going on has been the lack of translation, as well as communication. There were a lot of people around her that were speaking English and Tagalog, and because of the place she comes from, she couldn’t understand them, she would just know her local dialect.

There were people that were better upset about the fact that bringing the old woman to the convention meant that is has been breaking the tradition of Whang-Odd tattooing in her village. There are some that say part of the experience gets to take the journey there.

Carlos Mangoba, one who got tattooed by her in her village, said that he feels sad for those that got tattooed in Manila at her time being there instead of making a pilgrimage to see her home village just like he did.

He also added that she is a legend, and she did not need the publicity at all. He also mentioned that he believes the tattoo convention likely needed her more.

He also mentioned that she is already widely seen as an excellent artist and icon even before the trade show occurred. In this sense, he thinks that the Manila tattoo show needed her more than she needed them.