Home
Blog
What Is A Succubus Symbolism And Meanings In The Tattoo Culture?

Intelligent, sexy, and possibly deadly, the Succubus is not a creature to be underestimated. She is a powerful femme fatale who loves nothing more than to play games with men, and she might seem fun at first, but you wouldn’t want to make her angry. Succubus (Succubi) are powerful female demons who use their sexuality to appear through victims’ dreams, usually young males. They then entice and prey on these victims, slowly depleting their souls with each meeting. Their male equivalent is called an Incubus. They are often connected with Baobhan Sith, a vampire with deer feet that seduces men and is scared of iron.

The word comes from Late Latin succuba, “strumpet” (“to lie under,” from sub- “under” and cubare “to lie”). 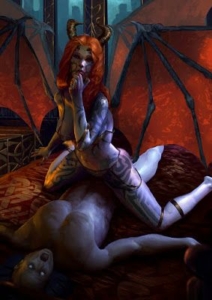 Today, Succubus is shown in many different images, like women with long wavy hair, immaculate curves, and silky skin. They wear tiny leather costumes to display their bodies, and they don’t even try to hide the unmistakable signs of their demonic essence. Bat wings, curled horns, barbed tails, and glowing eyes are usual among today’s modern Succubus.

These demons weren’t always so charming. From the dawn of this legend well through the medieval periods, Succubi were considered hideous, deformed creatures. They were smaller than ordinary people and crawled and stooped instead of walking straight. Their feet were like lizards, their faces like gargoyles, and their fingers tipped in ragged claws.

There is an obvious difference between today’s Succubi and the one of ancient legend.

Succubi in traditional fantasy consist of various sexually desirable shapes and forms, from long-haired to attractive and winged. They can appear in the shape they believe is most pleasing to their potential victim. They tend to default to a hardly dressed,bat-winged demon. Previously, Succubi were noted as disfigured monsters with monstrous rows of teeth, three sets of breasts, and blade-like nails. These representations vary from legend to legend.

The Succubus would use mystic powers to seduce a man and take his semen. Then, the Succubus would convert into an Incubus and entice a woman. The resulting child might have marks or deformities or other supposed traces of malign influence.

Characteristically, a Succubus is a manipulative creature. It uses compelling psychic and manipulation abilities to seduce and overcome its victim. She’s feeding from the victim’s soul and returning night after night until it is consumed entirely.

These demons have intense charisma and seductive power to match their good looks. They are clever creatures who can entice men with words like their bodies. They can be domineering and vengeful if slighted, but they ultimately take pride in their ability to please (and manipulate) men.

On the other hand, the ancestors of today’s Succubi had characters as wicked as their looks. Despite being sex-addicted, they had no interest in satisfying men. Instead, they used sex for their purposes—to please themselves, corrupt the pious, gain life force, or even have children!

Powers And Abilities Of The Succubus

We can’t discuss the Succubus story without mentioning her partner, the Incubus. He is a male sex demon said to attack women during the night. Since demons cannot reproduce independently, the Succubi and Incubi work together to produce offspring. Succubi collect semen from their affairs with men, then deliver the semen off to Incubi, who use it to impregnate the targeted women. Then the child (called a “cambion”) is born; it will have demonic features, thanks to the touch of the Succubus and Incubus.

These two sex demons have many similarities and a close working relationship. Still, some scholars have presented an even deeper connection: Succubi and Incubi are, in fact, identical creatures. They can shift between female and male shapes according to their sexual victims.

Probably the most well-known seductress of all time, Lilith, is also known as the mother of all Succubi. She appears in Sumerian, Greek, Egyptian, Roman, Judaic, and Christian mythology.

Lilith (called “lilitu”) first emerged as a goddess of fertility and witchcraft in Sumerian civilization. Later, the Assyrians and Babylonians connected her with dark forces. The Greeks gave her an extensive story. She was a beautiful woman whose goddess Hera changed into a monster after her beauty attracted Zeus’s roving eye. In her new form, she roamed the world, seducing men and eating babies.

Judeo-Christian mythology also put its definition on Lilith’s story. They portrayed her as Adam’s first wife, created at the same time. Unlike Eve, Lilith was no soft and modest partner. She declined to honor Adam as her leader. Instead, she explored alone and discovered the Red Sea, where many demons lived. This rebellious woman learned that she liked her fellow demons more than Adam. She repeatedly mated with them and began “bearing lilim at the rate of more than fifty per day.” The “lilim” went out into the world as demons, some as sexy and independent as their mother. These became the Succubi.

Female sex demons have been around us since the beginning of folklore. They can be found in different cultures all over the world. India has the “yakshini,” Native Americans have the “deer woman,” Arabia has the “qarinha,” China has the “mogwai,” and Greece has the “Lamia.” It’s impossible to discover which of these myths came first. Most likely, they all evolved independently around the same time period.

The word “succubus” first came across in Medieval English. By the fifteenth century’s end, these she-demons were well known and often discussed by theologians, who tried to explain their reproduction ability and origin.

Later, Succubi’s character popped up in witch-hunt stories. Women who tried to seduce men were implicated as being Succubi in disguise, while ladies who became pregnant outside of marriage were indicted of fraternizing with Incubi.

During the Renaissance and Romantic periods, interest in grotesque, evil, subversive female demons declined. Instead, artists diverted their attention to Greece’s Lamia, both unfairly cursed and beautiful. It wasn’t until the peak of Gothic literature that Succubi started to reclaim the spotlight. They were still different from their original state, being more handsome and intelligent.

Succubus as a character still has a big place in the science fiction and fantasy world. They were portrayed in the works of Stephen King, Stephanie Meyer, and Jonathon Stroud.

Surprisingly, the Succubus appears more in genres, like comic books and video games, where her attractive body and tight leather costumes attract lots of attention.

Explanation Of The Succubus Myth

From a psychological/political perspective, the Succubus legend is relatively straightforward. In a patriarchal system, men were intimidated by women who took control of their own lives and sexuality, so they demonized any “rebellious” conduct.

There might also be a biological or medical explanation. More than half of the total human population suffers from sleep paralysis. This condition causes the brain to regain consciousness before the body does. During an episode of this so-called sleep paralysis, people suffer from hallucinations involving all five senses and (sometimes) extreme terror. These episodes could easily be mistaken for a demonic visitation.

The most popular interpretation of the succubus tattoo is that it represents power and sexuality. The tattoo can be seen as a way to own one’s desires and to flaunt confidence in their sexual prowess.

The Succubus has been adopted by many as a tattoo design. For some, the tattoo expresses their wild side, while others see it as a way to tap into their primal desires.

For others, the tattoo may be seen as a way to tap into their dark side or to explore their shadow self.

The succubus tattoo has also been associated with death and destruction. In some cultures, the creature is seen as a bringer of death and is feared for its ability to drain the life force from its victims. Succubi are not purely evil and can be caring depending on their moods.

In others, the Succubus is seen as a force of nature, capable of leveling entire cities with its wrath.

No matter the interpretation, a succubus tattoo is sure to be eye-catching and provocative. This is the one for you if you’re looking for a design to make a statement.

Personally, I think that we’ve covered all the angles in the Succubus story. This will make the research and development of particular tattoo designs easier, but still with a powerful message and symbolism.