We all know that good architecture has the capacity to create some connections to a certain place. This runs so deep that sometimes people are getting architecturally inspired tattoos. Tattoo artists are also known to tattoo individual construction elements. One such element, which finds its uses in this art form, is the gargoyle. 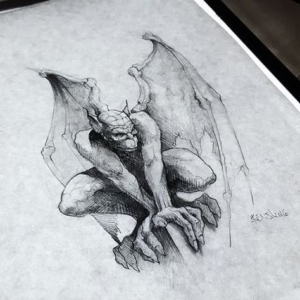 Such tattoos can be hyper-realistic tattoos of well-known buildings or linework which highlight specific architectural elements. Architecture tattoo designs become increasingly popular, and you do not have to be an architect to get one.

Whether it is to commemorate a place you lived or evoke the nostalgia of your favorite vacation, many of these tattoos can be an excellent artwork. Other people use familiar architectural elements and lines to create a fantasy space across their skin.

Gargoyles are originally architectural elements. They started as waterspouts, designed to funnel rain away from buildings by spouting it out the mouth of a carved creature.

In architecture, gargoyles are carved or formed grotesque with a spout that is designed to convey water from building roofs. The spout prevented rainwater from running down the masonry walls and eroding the mortar between. Architects often used several gargoyles on one building to divide the flow of rainwater off the roof. This was to minimize the potential damage from a rainstorm.

Gargoyles are often an elongated fantastical animal, and its length determines how far the water is directed from the wall. The term originates from the French word “gargouille,” which means “throat” or otherwise known as “gullet.”

The gargoyle animal became famous in the European Middle Ages on the exterior of lofty cathedrals. These mythic animals were grotesque birds or also beasts, and people believed that they ward off evil.

Gargoyle tattoos are the types of tattoos that people usually get for several different reasons. Regardless of their design, gargoyles are usually quite menacing looking. This makes them attention grabbers, regardless of their placement or the meanings attached to them.

One of the principal reasons why a lot of people get gargoyle tattoos is as they look great in that form. They are creatures that look interesting and draw the eye. They can come in many different forms. They are also easy to tweak in order to make your design. At the same time, they keep that classic look, which made these monsters quite recognizable for centuries.

Tattoo art from nowadays occasionally alludes to the functional origins of the gargoyle. This is done with the use of finely shaded blackwork, which simulates the look of carved stone.

The gargoyle usually finds its place as a religious symbol, particularly for Catholics. People usually placed them on churches as defenders against evil. A lot of people believe that the gargoyles are evil themselves too. However, the fact is that Catholics usually see them as monsters that can fight off the darkest and most evil creatures in this Universe.

The meaning of gargoyle tattoos has some relation with warding-off bad spirits. They are often in the dark and grotesque style, only in black color, with red or yellow colors of their eyes. This is done to make them appear as real scary monsters.

Some people are going to get this tattoo to show others that they are proud of protecting the people around them. In such cases, the gargoyle represents the owner, as he or she is the protector. If you believe that you are the protector of your family and friends, this may be a perfect tattoo for you. It is not just a design that looks cool; it can also represent a trait which you may be proud of.

Most of the gargoyle tattoo designs are only the gargoyles themselves. However, it is not uncommon to include a moon in the background to show that it works at night. Some people even take this further on, and they include the perch of the gargoyle on a building, together with stars. These extra images will not add any additional meanings to the design. However, it can give the gargoyle a cooler look.

Gargoyle tattoos look good on any body part, but they seem to be most popular as back tattoos. This is probably like a lot of people want to get them as large as possible. Plus, artists can do a lot of authentic line work with these creatures when they are larger.

Since most of the gargoyle tattoos are an inspiration for the classic architectural statues, they are not usually too colorful.

After reading this, it will probably be easy to see why the gargoyle tattoos became so popular in the last several years. There are a lot of design choices, some excellent meanings, and they are good at any size. However, you have to be sure that you are patient during the session and find the right artist.