A lot of times, particularly at certain periods of the year, the question about raised, as well as itchy tattoos comes up. Those that suffer from this condition often describe it as being occasional rather than consistent, even though it can be either. Pinpointing the reason for this discomfort is quite difficult, as there can actually be several different causes.

Here, we will present you some of the causes: 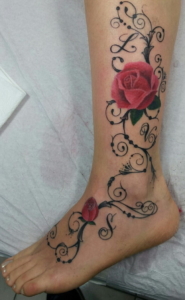 While it is unlikely that you develop symptoms of an allergic reaction to a healed piece of ink, you are going to find yourself suffering from an itchy, inflamed tattoo shortly after because you are allergic to the ink.

An allergic reaction does not happen immediately – it can appear after a week or so after receiving the tattoo, or it can also appear after years. Some changes in the body can actually cause adverse reactions to several things which once were totally benign. An ink allergy is going to be itchy, as well as raised only in some spots of the particular color, and it is more likely to be a constant irritation rather than one who comes and goes.

Luckily, if the random raising of your tattoo is not painful and infrequent, that you will not have to rush to have it removed. Some topical ointments which are made for allergic reactions can actually help in relieving mild irritation, while a prescription drug or even tattoo removal can be required for some serious cases. Also, Aloe Vera and coconut oil can also be used.

The weather is actually the most likely culprit when it comes to occasional, but consistent irritation.

A lot of people notice that it usually occurs during the summertime, as the temperatures and humidity rise, and it can cause your tattoo to swell slightly. This swelling is going to cause a slight stretching of the skin, which will also result in an itchy condition. A well-healed tattoo is not likely to be damaged by scratching, but it is still best to try to avoid it, as you can break the skin and damage it.

Because humidity and dry air can cause skin irritations, a lot of artists cite this as the most probable reason why your healed tattoo becomes raised all of a sudden.

The best thing would be to wash it and apply a nice emollient to keep your skin soothed and your ink preserved. Topical anti-itch creams, ice or cold water can actually help you in alleviating this discomfort temporarily too until the weather becomes more skin-friendly once again.

For other people, it is just the opposite – the cold winter months and subsequent dry skin causes itchy, as well as irritated tattoos. Dry skin can actually cause itchy rashes, and it could just be a coincidence if one appears over a healed tattoo. However, if the pigment under your skin is exposed to extreme cold, it could actually react to the temperature change adversely. You should keep your skin moist with lotion and avoid extreme ups and downs of the temperature, in order to avoid such problems.

Some changes inside of your body can affect you on the outside, as well. A rise in the blood pressure, increased adrenaline, as well as a change in the temperature of the body – all of these things can affect the tattoo. If you notice that your tattoo is itchy and uncomfortable, you should think about what you were doing in recent times, and you might find a connection.

Often, stopping this activity for some period is going to cause the tattoo to feel better on its own.

For example, you can discover that you have some type of skin condition which you were not aware of having, and your tattoo may be more sensitive to it. A skin condition can actually be as mild as dry skin or as severe as eczema, even though the latter is not going to surface just because of a tattoo.

Yes, you could be the only cause behind your raised tattoo. Even when you are not suffering from eczema or some other skin condition that could dry out your skin before, it is always possible to develop them later in life – after you have added some ink on your skin.

If you actually believe that you have some type of skin condition, visiting your dermatologists can help you in relieving any type of body itching, including your tattoo too.

Most often than not, your tattoo is going to return to its normal self in no time, even if you are not applying some topical anti-itch solution. If your tattoo is not already healed, you should check your artist and ensure that you are not suffering from an infection or some seriously botched work of art.