A tattoo on the chin is something that has been used throughout history in different cultures but has lately been making a big come back. This trend is a thousand years old, and the idea of tattooing the chin was not just used as a way of expressing the fashion side of the owner.

During that time, the tattoo artists were both men and women, but mostly women. The argument why this was the case is that at that time, people wanted the tattoo artists to have needle threading skills. The older woman of the area was the best suited for this job since they were great at stitching and sewing. People at that time did not use the ink that we use today for the tattoos. These tattoos were done by using a large skin-sewing needle that would be curved in a mixture of seal oil, urine, and the black residue that would be scraped off from a used pot. From here, the sewing needle would infiltrate the part of the skin that was to be inked, similar as with the stick and poke style of tattooing. These tattoos were typically practiced by the Eskimo people from Alaska and people from other parts of the Atlantic.

The chin tattoos that Eskimo people wore were so different than many other spiral tattoos. These chin tattoos were mainly done on a woman, and even though they were a simple design and pattern of lines, the importance of these tattoos on the chin was powerful. These tattoos were called chin stripe or tamlughun and included multiple stripes that ran 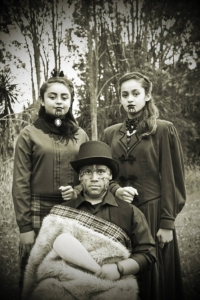 down the chin. These chin stripes were typically used as some rituals for young ladies that have reached maturity. It was a sign to men that the certain woman had reached puberty. This design was also used as a form of security during enemy raids. Even though this ritual has been out-of-date for thousands of years, there are still some inhabitants of Alaska who want to remain true to their roots.

Even if nowadays, artists do not use the same ink as they did back then, but the idea of the tattoo on the chin remains the same. This tattoo only serves as a representation of how tribes used to get tattoos on their face and chin. After this whole time, people of different backgrounds and ethnicities still get tattoos on their chins, designs, and ideas for a piece such as this are infinite. Below are some popular tattoo styles that have been seen on people who own some unique and creative pieces of art.

The most popular and most often, the best form of chin tattoo is the one with a tribal design of some sort. As previously mentioned, the native tribes of the Atlantic and Alaskan regions, usually the Eskimos, would have different tribal tattoos not just on their chins and jawline but all over their bodies and face. Even though the practice of tattooing a child’s chin to show that they are mature enough to have children has died out, the idea that the ink on the chin will help guard oneself against evil spirits is very much alive. Even today, many people choose to get a traditional stripe chin tattoo, and in some parts of Alaska, some tattoo artists do these tattoos in the same manner as they used to in the past. The main difference with these authentic tattoo styles is the ink. Some other tribal designs can be used for a chin tattoo. Chin tattoos do not always have a special meaning since sometimes they are only used as a decoration.

Not all chin tattoos have to be tattooed right upfront. Lots of people get the ‘under chin’ tattoo as well. This kind of tattoo is a little less obvious, and if you ever need to cover it up with makeup, for whatever reason, it can easily be done. If you are a man, you can grow a beard and completely hide this tattoo if needed. Due to the placement of this tattoo, the pain level might be a little higher than a regular tattoo done somewhere else.

This is because in this area of the chin is the soft part of where our neck and jawline meet. The only thing you need to worry about is for the graphic to fit the spot, and not to be too stretched out. Usually, flower tattoos of some kind are inked under the chin. For instance, some great options are a rose with thorns or a black lotus. Adding color to this kind of tattoo can give it a flashy look that can easily fit with whatever other tattoos you have around the area. You can also ink some text in this area. For example, the phrase ‘chin up’ is used quite often when getting a tattoo of words under the chin. This tattoo serves as a daily reminder to always look up toward the positive side of life and not to look on the negative. To keep your head held high, express a means of leadership, and this is precisely what the phrase ‘chin up’ represents.

If you are interested in tattoos placed on specific parts of the body and you are not afraid of some extra pain, then you should think about getting a chain or under the chin tattoo.