Among all the weapons used by the Vikings, dagger seemed to be quite insignificant. The most frequently used weapons included ax, sword, or spear. The Viking dagger is a rear appearance in the Viking sagas.

Despite the small size, in the end, this dagger turned out to be a useful and deadly weapon for any warrior. The symbolism of the Viking weapon has excited many Viking enthusiasts and those interested in the Norse mythology.

The truth is that a dagger is a knife. The main difference is that a dagger is double-edged, which means that the edge of a dagger is symmetrical, and both sharp sides run down to the point. Viking knife and dagger were made out of cut-down iron from the Viking sword or sax (short sword). That means that when the Vikings had used their sword or sax until they could no longer be used, it was later turned into a dagger or a knife. They used to cut the usable iron pieces from the worn-out weapons to make a new dagger. The standard Viking dagger was about 31cm long. The Viking knife was very similar to the Viking sax because sax was the Viking weapon with a single sharp edge.

Meanwhile, the dagger was almost the same as the Viking sword because they were both double-edged, but this dagger was much smaller in size. The warrior could not attack the enemy from a distance with the dagger. However, they could deal with an unexpected and deadly blow to the enemy during the hand-to-hand conflict. A Viking history told the story of a warrior who hid his dagger behind the shield, captured his one chance, and stabbed the dagger in the chest of his foe, permanently ending his life.

Very similar to the knife, a dagger might not have many positive and uplifting ideas when it comes to symbolism. But for those who are Viking enthusiasts, the dagger is considered to be a carrier of the inspiring Viking spirit and tales. 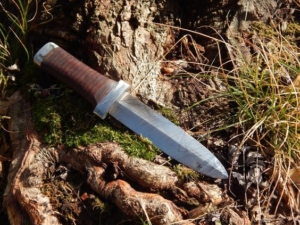 When we take a look at the dagger through the lens of the weapon, we can reveal its hidden potential, deadly attack, military skills, and dominance over the difficulties and accomplishments. However, not all of the Viking warriors could utilize the dagger to its fullest potential. Because of that, the warriors needed a specific set of skills to wield a dagger and took the life of the opponents.

In the world of human relationships, a dagger is considered to be a negative symbol. Maybe the reason for that is because we care a lot about the topic of love and relationship, so we show little favor toward the dagger. Generally speaking, most often, a dagger represents the betrayal and separation in relationships.

Furthermore, the Viking dagger is used to represent the connection between humanity and the gods, and that is because, in the saga, the Vikings used their dagger to thrust into the sacrificial animals. This means that dedication to gods is the other meaning of the Viking weapon.

The most personal symbolism of the Viking dagger is the duality of the mind and the unpredictability of the action. Concerning the duality of the mind, the dagger focuses on the battle within our heads, which is the nature of our minds. On one side, we are sane, always speaking of clarity, subtle judgment, understanding, and kindness. We are rational and logical. This is the great side of our mind that all of our goodness lives in. The other side can be more negative, always causing troubles and torturing us by allowing the negative vibes into our life.

The unpredictability of the action is the symbolic meaning that was derived from the actual usage of the Viking dagger. Viking warriors used to hide their dagger to deal with an unexpected blow toward the enemies. Nowadays, these weapons symbolize our good preparation for the upcoming challenges. We do not boast about our plan but instead work hard and prepare everything carefully in silence, allowing the success to be the noise. This stands for the unpredictability of the Viking dagger in the modern sense.

As a tattoo design, this weapon can symbolize everything that was mentioned before and can be combined with other elements and symbols from the Norse mythology. For instance, in Northern Europe, where Viking images are more prevalent in tattoo work, the Viking dagger melds the popular dagger tattoo with local cultural flavor.