Tattoo designs and images can always be fascinating, historical, and attractive to the human eye. Humans prefer tattoos that have symbolic meaning for them or make them in the memory of their loved ones, friends, or other people who passed away. Every tattoo design is specific on its own, having its meaning and symbolism. In this article, we are going to present you three tattoo designs that are related to one weapon, the dagger, the dagger and skull tattoo, and the dagger through the Asian head tattoo. These are usually seen as a more ruthless and cutthroat weapon than the sword, which is much longer, elegant, as well as primarily utilized in battle. A dagger, on the other hand, is maybe more usually used as a secreted weapon in stealthy assassination plots and attacks. Because it is quite smaller than the traditional sword, it can be kept hidden on the body until the time is just right.

These small, secret weapons may be tattooed alone or in a combination of larger designs, such as a dagger and skull or dagger through the Asian head. 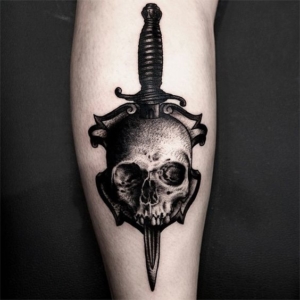 Just like most weapons, the dagger is part and parcel of violent aggression. However, more than other types of weapons, it also acquired some of its specific symbolism.

More comfortable to conceal and draw, the dagger became favored over the sword as a constant companion, and became the favorite one of assassins, coming to symbolize treachery and betrayal.

In some cultures, they have very specific shapes and also carry special ritual meanings, like the three-sided Tibetan phurba, which is the symbol of the submission of demons.

This tattoo is not seen as a mainstream tattoo, even though there are a lot of people who draw this design on their skin. The dagger itself has a lot of different associated meanings itself. Still, your tattoo can be tattooed with a variety of other different symbols and elements, in order to emphasize the meaning you have in your mind.

Most of these tattoos are medium-sized. The shape of the weapon predisposes it to certain parts of the body, such as arms, legs, hips, or back.

Dagger tattoos also hold a lot of different symbolic meanings for the ones that wear them. Over the years, tattoo artists, as well as wearers, have put their creative twist of designs.

Daggers were used for display, fighting, sacrifice, as well as games. These tattoos may be utilized to represent the same thing. Sometimes, this tattoo might be a warning to others of the hidden danger in the wearer, while other times, it can be a visual reminder for the tattoo wearer of dangers hidden in other people.

One advantage of the dagger tattoo is that the design is easily mixed with some other symbols, such as snakes, swallows, vines, hearts, skulls, flames, feathers, dragons, and a lot more.

As these tattoo designs may be highly personalized, there are a few different meanings behind this weapon.

Daggers are great when tattooed alone, but as we already mentioned, they could become more meaningful when they are paired with other symbols and images. Here are two examples:

If the daggers are crossed behind the skull, this design may be evocative of the Jolly Roger, the black and white flag which pirates would fly when approaching ships. The flag served as a warning, meaning “surrender or die” and it remains a recognizable symbol or intimidation in the culture today.

The dagger and skull tattoo may also be quite menacing in a straight representing death, and the placement of the dagger and skull, such as through the back of the skull or also straight through the top, may create some personalization to this design. Another potential meaning of this tattoo is conquering the fear of death of a person. It can also mean that the wearer killed his or her fear and that death no longer worries them.

This tattoo can also symbolize death, memory, protection, or even bravery.

This is a racist symbol that became popular in early American tattoo art, which shows an Asian head with a large dagger plunged through it, top to bottom, with the blade exiting through the mouth. The Asian facial features and queue or single brain of hair are reminiscent of American depictions of Chinese people at the turn of the century.

These three are just several of the different variations of these tattoos, which show how the meaning of the tattoo may change with the incorporation of some other symbols and images.