There is no more pleasing sound in the morning than that of the tweeting of the birds. If you add some sunshine to that, you end up with the start of a great day. Birds serve as symbols of free-thinking and freedom in general. Their capability to fly through the sky is one of their traits that we all wish we had. However, when you start talking about different bird species, you can get into some different meanings. Just like any other bird species, the blackbird represents several different things with particular meanings and symbolism. 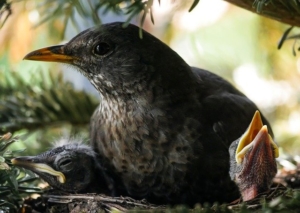 There are several reasons why people are fans of blackbirds. The number of reasons is so significant that they even get this bird tattooed in various ways. The blackbird tattoo has its symbolism and meaning. To make clear, there is a species of bird called blackbird, and there are trendy versions of bird tattoo designs in which they are generally silhouettes. In this case, these are recognized as blackbirds. Below, we are going to discuss the distinction.

The ordinary blackbird is a species in the true thrush family. You might also see it under the name Eurasian blackbird or just blackbird when it doesn’t lead to confusion about other similar species. They are all over the world and have been lately introduced in New Zealand and Australia.

The male blackbird is all black apart from its yellow bill and eye-ring. Females and younger blackbirds are more of brown color. The rise in gardens and the woods, and they build a lovely cup-shaped nest in which they raise their young. They are very defensive over these areas, and you might see some more intimidating acts by these birds during the mating season.

While we talk about blackbirds, we must mention the birds of a black color, also called blackbirds. There is a lot to discuss as far as symbolism and tattoo meanings.

Tattoos of blackbirds and other dark tattoos represent privacy, the unknown, mystery, pure potential, perception, and magic. Blackbirds are very secretive birds. This comes from the fact that a blackbird does not reveal its intentions easily. This is true with both dark and light energy.

The symbolism of the blackbird and those birds with black color is related to the moon phases. They vary from dark to light and back again. To understand the lunar phases, a person needs to tap into a new way of sensing things. It is an obligation to understand a higher level of knowledge (blackbirds flying) and admit the potential voids (the dark silhouettes).

In general, birds are a symbol of a higher path of knowing life in the heavens and higher ideals. Also, the black color is a symbol of pure potential. When combined, we get the meaning of the blackbird tattoo.

We can say the blackbird tattoo symbolizes higher thought, higher ideals, and higher intelligence. This comes from the fact that birds fly high and are closer to the Universe’s higher energy. The blackbird tattoo can also serve as messengers of something higher.

There are many variations of blackbird tattoos, and much of the meaning lies in the image. Birds are used in different ways when tattooing, and how the bird is depicted influences the tattoo’s meaning. We will talk about a few ideas and what they mean below.

A tattoo of a feather exploding into little birds serves as a symbol of letting go and being free. The feather is already a breathtaking image with a great deal of symbolism on its own. However, when paired with the birds flying out of the feather, you have something diverse. It appears as if the birds broke their chains and are flying free. This might represent you freeing yourself from the constraints either you or society has placed on you. You were already a beautiful feather, but you were motionless. Now you can fly free.

The blackbirds on a wire tattoo usually have a message built right in. The famous singer Bob Marley has a song called Three Little Birds with the message of peace. He wrote this as these same birds perched right outside his window for days on end. You can also see two birds facing each other on a wire. This is an attribute of love and companionship.

Blackbirds flying in a group stand for several things. One of those things is renewing or regrowth. It might also be a symbol of death. The meaning of the tattoo design depends on what is combined with this image.

When getting your very own blackbird tattoo, you should take some time to decide about the right design. You don’t want to regret getting it in the first place. Take the time you need in the search and research for a meaningful tattoo.